As a native of Louisiana – the state most deeply impacted by the 2010 BP oil spill, Chris Macaluso was... 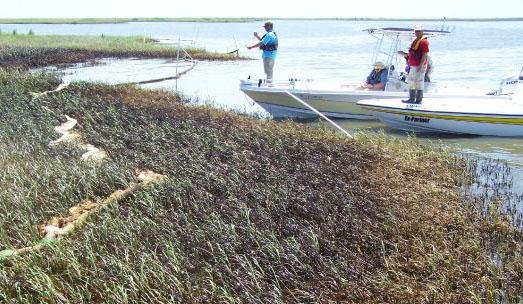 As a native of Louisiana – the state most deeply impacted by the 2010 BP oil spill, Chris Macaluso was thrilled at the Gulf Coast Ecosystem Restoration Council’s adoption of an official recovery plan. Particularly promising, he notes, is the possibility of establishing a citizen advisory panel.

That’s a key point because Macaluso has seen such programs work in a big way. Now directing the Theodore Roosevelt Conservation Partnership Center for Marine Fisheries, Macaluso formerly served as Coastal Outreach Coordinator for the Louisiana Wildlife Federation. His home state created a Coastal Restoration and Hurricane Protection Master Plan for 2012 and involved the public, which proved profoundly helpful.

“I think the important thing is to have engaged stakeholders sitting at the table talking about the various projects that come up for discussion,” Macaluso said. “That way, you have someone who can go back to their respective communities, whether it’s commercial fishing or tourism or recreational fishing, or folks on the environmental side. You’ve got someone who can go back and deliver the message of what’s going on.”

Announced August 28, the Council’s “Initial Comprehensive Plan: Restoring the Gulf Coast’s Ecosystem and Economy” establishes the types of projects the Council may target. The Plan includes approaches to help repair habitat degradation that occurred in the wake of the oil spill, as well as issues from the preceding decades. Central to all of this is the future health and sustainability of recreational fishing throughout the Gulf.

Now anytime a big agency attempts some massive undertaking like Gulf of Mexico restoration, someone’s going to feel left out. Such disconnect, Macaluso said, lessens when everyday citizens have a place at the table.

“You get a lot of push back from groups saying ‘we just weren’t part of the process; we didn’t know this was the kind of project (the agency) would be selecting,'” he said. “Not everyone’s going to believe all the projects are serving their best interest, but at the very least, you have an opportunity to have a representative of various stakeholders go back to their communities with accurate information.”

For updates on the restoration plan, visit www.restorethegulf.gov or www.trcp.org