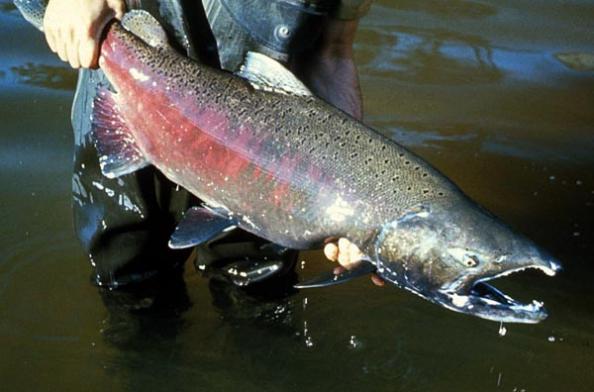 State biologists had initially estimate 600,000-plus fish for a “good” run. The revised expectation of over 1.2 million blows away the highest of hopes. In fact, that’s the largest run since the Columbia River dams were built and salmon counts began.

As noted by an Associated Press report, biologists attribute the impressive increase to abundant food and cool temperatures in the ocean. Also helpful have been improvements at fish hatcheries and court-ordered actions over the past decade to make the Columbia Basin’s 14 dams less lethal to fish.

NOAA Fisheries Service biologist Bill Peterson told the AP: “We predicted (the run) was going to be good, but this is better than good. Things will be great next year, too.”

This super salmon surge means that anglers no longer have to release unclipped Chinook salmon between Buoy 10 at the river’s mouth and Warrior Rock on Sauvie Island. The restriction existed to protect wild salmon spawning in lower tributaries, but biologists say that most of those fish have left the Columbia for their home waters.

So, more angling opportunity and no one gets gored or trampled – we’ll take this mass movement any day.