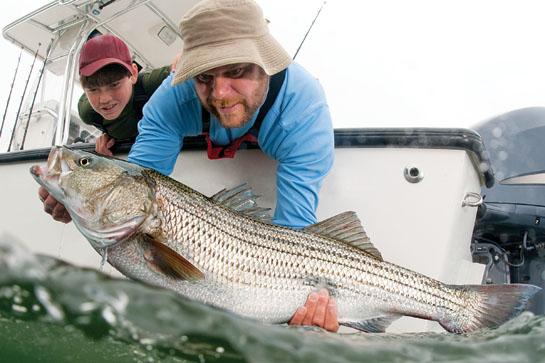 Resume: Myerson caught the 81.88-pound world-record striped bass out of the Sound in August 2011.

October Approach: In the fall, Myerson says, fish are less line-shy, and blitzes during the daytime are more common. He fishes a three-way rig with a bucktail and live bunker in rips and around structure from 50 to 55 feet of water. He adjusts his bucktail weight, from ¾ to 6 ounces, depending on the current. Myerson has designed his own rattling bucktails to mimic the sound a lobster makes while clawing across the rocks.

Resume: Gilkes runs Coops Bait and Tackle on the Vineyard, so he knows about every fish caught on the island. He’s also a seasoned angler himself.

October Approach: Bunker is the name of the game on the Vineyard come October. But if the bait isn’t around, he’ll be well armed with lures. He targets submerged points in his 21-foot Parker.

“Points create a little rip, and bait coming down the beach gets trapped between the point and the sandbar,” he says. He’ll fish the points with a white Danny Plug. “You want it to look crippled.”

Resume: Coppola has won Montauk’s Surfmasters tournament’s wetsuit division twice in back-to-back years, most recently with a 44.5-pound striper in 2010.

“Work the needlefish as slowly as you can, keeping it above the rocks and in the current,” he says. To fish a darter: “Work it right below the surface. When you cast out, give two or three cranks so it digs in.”