Talk about your permanent vacation. How does a striped bass, a North American species known to stay within about 5... 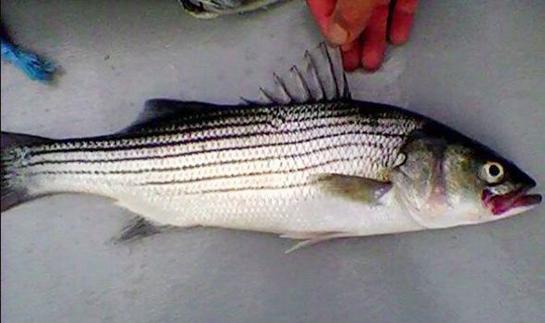 Talk about your permanent vacation. How does a striped bass, a North American species known to stay within about 5 miles of the coast, end up hooked by an angler fishing from a shoreline in southeast England?

According to the Barnet and Potters Bar Times, Martin White recently made one of his monthly trips from the London suburb of New Barnet to the port city of Dover, caught a few mackerel and landed the “catch of a lifetime” on freshly cut chunk bait. White said the 2-pound 7-ounce fish fought like an indigenous bass species, but an online search tentatively identified his catch as a striped bass.

The general theory is that this particular fish hitched a ride on ocean currents as a fry (juvenile) and found its way into England’s coastal waters. Though epic in scope, such a journey is certainly possible. The Gulf Stream, which carries warm water from the Gulf of Mexico and along the eastern U.S., branches northeast with the North Atlantic Drift reaching the U.K.

The Times reports that Mike Heylin, chairman of the British Record Fish Committee, said he believes White’s fish is the first of its kind for Britain. DNA from scale samples could have positively identified the fish, but White baked his catch with lemon and black pepper that evening.

Came over as a fry; end up baked. I hear Britain’s a dandy place to visit, but that’s probably not the best tourism slogan.