Photo by Barry and Cathy Beck When the nights turn cool and the leaves change colors, trout start to feed... 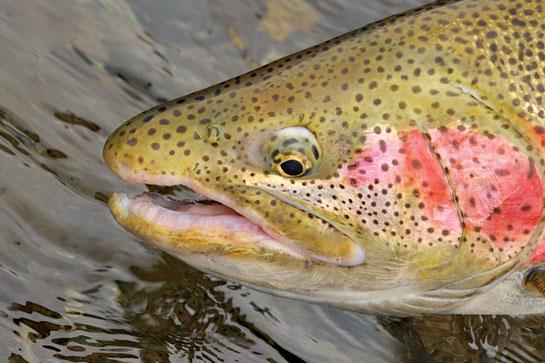 Photo by Barry and Cathy Beck

When the nights turn cool and the leaves change colors, trout start to feed more aggressively, often abandoning their notorious wariness. The major insect hatches of the year are about over, and the long winter is coming. Add charged-up spawning behavior to the equation, and you’ll understand why trout fishermen come to think of mid-fall as the best time of all to fish and the ideal time to break out the streamers.

Big flies that offer a bulky profile and lots of motion usually outperform traditional feathers-and-hair patterns. The Hawkins Triple Double is a good example. Featuring a rabbit-strip tail that undulates enticingly, Flashabou and rubber legs to a get a fish’s attention, and dumbbell eyes to give the fly a jigging motion in the water, this thing just screams, “Eat me!” Tied on a size 4 hook, the Triple Double is not so unwieldy that you need an 8-weight to cast it.

When trout seem sulky, provide an easy meal they don’t need to work for. Instead of stripping the fly, dead-drift it–as you would a nymph–through the strike zone, allowing the currents to give the materials lifelike motion. This strategy works best where trout go to hide: along deadfalls and weedbeds, in deep holes, and below midstream rocks. Streamers like the Conehead Rubber Bugger work great in streams that have good crayfish populations.

Although most anglers have fished two flies before, not many have fished two streamers at the same time. But this is a great way to discover which colors and patterns the fish are keying on. Start with a stout 7-foot leader of 1X, and tie on the first fly. To the bend of its hook, add 2 feet of 2X mono and tie on the second fly. I will often start with a sparkly Tequeely up front and an olive Woolly Bugger behind it. Use a strip-and-pause retrieve.