Florida Angler is the ‘Queen of Kings’

Photo courtesy of Wes Crowell Tampa’s Debbie Miller is the real deal when it comes to sport fishing, and she’s... 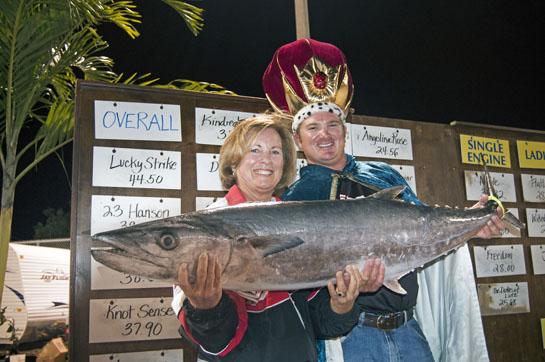 Tampa’s Debbie Miller is the real deal when it comes to sport fishing, and she’s earned her crown as the “Queen of Kings.” She’s put the brakes on some of Florida’s toughest fish and just completed a double header of “royal” accomplishments.

She caught the largest king mackerel during the 20th annual Old Salt Fishing Club King of the Beach tournament at Madeira Beach on Nov. 9. While the trophy and crown (literally) for the team event was awarded to the boat’s captain, Billy Miller, her son and a Tampa Bay guide, everyone knows it was mom who laid the smack down on 44.5 pounds of hell-bent kingfish.

In early August, Miller showed her skill at taming tarpon – the heralded sportfish known as the “silver king” — by winning the Suncoast Tarpon Roundup’s prestigious Finale Day, a one-day shootout among the top qualifiers of the 2 ½-month tournament. She released three tarpon during this event.

I’ve fished with the Millers and witnessed this lady angler single-handedly whip big tarpon that would have reduced less experienced male fishermen to an awkward struggle for dignity. She’s not the type to boast or brag, but Debbie Miller exemplifies the fact that sport fishing – even the heavy-duty stuff – is an awesome, family-friendly activity that welcomes everyone, regardless of gender, age, or any other demographic.