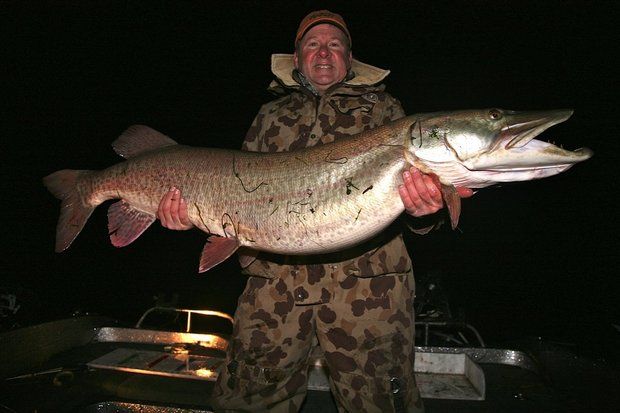 Forjohn, a physician’s assistant from Ambler, Pennsylvania, landed an enormous 130 cm muskellunge while trolling a 12-inch Swim Whizz lure near Clayton, New York aboard Capt. Bob Walter’s Water Wolf Charters. Once hooked up, Forjohn needed only six minutes to land his trophy, which he, Walters and first mate Darryl Raate quickly measured, photographed and released alive, capturing the whole sequence with the boat’s video camera. The fish measured 54 inches overall, but 130 cm (51.18 inches) from the tip of its lower jaw to the “v” of its tail, the official IGFA measurement. If approved, Forjohn’s catch would best the existing All-Tackle Length record by 2 cm.

That current IGFA All-Tackle Length muskie record of 128 cm belongs to Carlson, of Rockford, Illinois, who caught the fish on the Ottawa River on the border of Ontario and Quebec about two and a half years earlier.

Carlson this week told the Syracuse Post-Standard he “had no clue” that a longer fish had been caught and submitted to the IGFA to surpass his record when two days later he was fishing the St. Lawrence with Canadian muskie guide Mike Lazarus. The duo were trolling in the Gananoque area of the river when a massive fish crushed a Legend “Perch Bait,” then fought for 15 minutes. He said he quickly measured, photographed, and tagged the fish before releasing it. Carlson actively participates in a Quebec fisheries study, and wanted to ensure the fish’s survival. He was quoted Thursday on the Post-Standard syracuse.com website as saying the fish was so big and was wiggling so much that he didn’t measure the fish squarely on the official IGFA measuring device.

“It was hard to position. I settled on 132 centimeters, but it was probably 134, the newspaper and Syracuse.com quoted him.

That quote has Capt. Bob Walter’s questioning whether the IGFA will recognize the catch that would surpass the one caught on his charter boat.

“His ducks got to be in order to be eligible, everything has to be done right. Good big fish but you have to follow procedure,” said Walters, who had an IGFA kit aboard and was ready to record Forjohn’s fish. “You have to have pictures, the board has to be laid out flat, the picture has to show the bottom jaw hitting the end of ruler and the fork of tail.”

Carlson, an orthopedic surgeon, was in surgery Friday morning and could not be reached for comment and Jack Vitek, the IGFA’s record coordinator did not immediately return a call.

The IGFA’s All Tackle Length category, designed to promote catch and release, started in 2011.