Recreational fishermen have long viewed Goliath grouper with utter disdain–kind of like that grade school teacher’s pet that annoyed the... 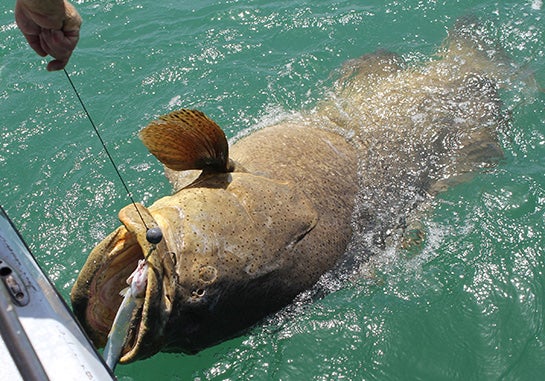 Recreational fishermen have long viewed Goliath grouper with utter disdain–kind of like that grade school teacher’s pet that annoyed the crap out of other students, but hid behind unflinching protection. Why such contempt? Well, it’s basically a double whammy–recreationals cannot harvest Goliaths, yet Goliaths help themselves to loads of grouper and snapper currently available for recreational take.

At least that’s the common assumption.

Overfishing prompted NOAA’s South Atlantic, Gulf of Mexico, and Caribbean Fishery Management Councils to close all harvest in the early 1990s, but after two decades of moratorium, Goliaths abound throughout the Gulf of Mexico and Southeastern U.S. From the juveniles growing up in mangrove basins to the offshore beasts of several hundred pounds, Goliaths have a nasty habit of attacking hooked fish and those speared by divers.

Such thefts frustrate anglers, while fueling the premise that these fish are also depleting reef species in their daily feeding. However, results of a stomach contents study conducted by Dr. Chris Koenig, Dr. Felicia Coleman of Florida State University’s Institute for Fishery Resource Ecology, found that Goliaths favor crustaceans with crabs comprising 63 percent of their diet and shrimp at 7 percent.

The study also found lots of finfish in Goliath bellies, but prized recreational catches like snapper made up only 3 percent, while toadfish accounted for 5 percent.

Notably, such studies provide only a one-day snapshot of the specimen’s diet, but a report from the Gulf Council notes that chemical signatures found in the muscles of fish can indicate what food source was used to build that tissue. The more nitrogen in the muscle, the higher up on the food chain an animal feeds. Koenig and Coleman found that goliath grouper holds a relatively low position on the food chain–about the same as pinfish.

Steady Goliath recovery has prompted calls for reopening the harvest. A Goliath Grouper Steering Committee formed by the Gulf and South Atlantic Councils will continue looking at the issue.

For the time being, though, science seems to indicate that Goliaths–while verifiably given to opportunistic sport-fish theft – may not be doing as much damage as once thought.