DIY Big-Game Fishing: How to Catch Sailfish on a Budget

Photo by Brian Nelli No doubt billfish appear somewhere on every angler’s bucket list. For most, though, the high cost... 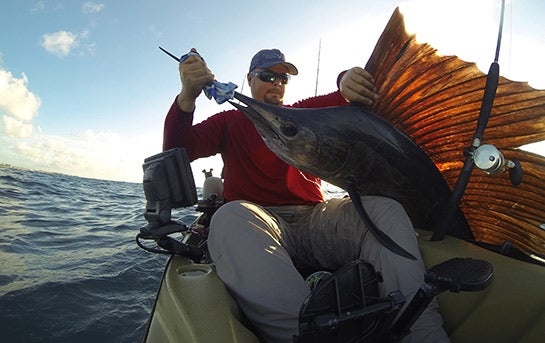 No doubt billfish appear somewhere on every angler’s bucket list. For most, though, the high cost of booking a charter prevents fantasy from ever becoming reality. Thankfully, things are changing. A growing trend in Southeast Florida doesn’t involve charters, fiberglass, diesel, or high-horsepower outboards–but it does entail Atlantic sailfish, one of the most popular gamefish along the state’s Gold Coast. Forsaking custom sportfishers or brawny center consoles, a new cadre of anglers is heading offshore via paddle or pedal power to capture spindlebeaks with regular frequency. Targeting sailfish and other blue-water pelagics is becoming so popular, in fact, it’s spawned a tournament series.

“The way kayaks are made today has changed the game entirely,” says Joe Hector, promoter of the Pompano Beach Sailfish Smackdown tournament. “Hobie, Jackson, and some of the other brands are made for offshore fishing. The biggest challenge is getting through the surf. That and bigger boats not seeing us, even with safety flags.”

“Remember, though, that a kayak is not like a boat,” Hector adds. “You can only carry three or four rods, so you’re at a disadvantage. But for whatever reason, sailfish like to congregate around kayaks, just like mahi mahi. I think because it appears to them to be bait-attracting structure in the water. They’re looking to feed. Our success rate is very high, especially in the wintertime.” Hector says kayaks are able to fish in waves 3 to 4 feet high, since they ride over the crests rather than through them.

With the close proximity of the Continental Shelf and deep water within yards of the beach, Gold Coast ‘yakkers don’t have to venture too far offshore. Most range less than 1 ½ miles and rig their crafts with a depth sounder to help them stay in the sailfish zone. Brian Nelli has been kayak fishing from Stuart to Boynton Beach for seven years and guiding anglers for the past three. He placed second in the May Madness Extreme Kayak Fishing tournament and won the September Slam.

“For sails the depth is generally 100 to 175 feet of water,” Nelli explains. “Color changes are a huge target. Seeing flying fish is another big flag for the depth you should be fishing. I usually run one line on a downrigger and one on a flat line, slow-trolling. If the wind and current are favorable to drift, I’ll run two flat lines. The current off our coast is generally 1 to 3 miles to the north. So if we are fishing off Boynton Beach we would drift around 9 miles to Lake Worth. A trip like that takes five to six hours.”

Nelli’s sailfish rig consists of a 6000- to 8000-series spinning reel loaded with 30-pound-test braided line. The rod of choice is a 30- to 65-pound-class Trevala 6-foot 6-inch jigging model. He likes that style because of its light weight, strength, and compact size. He adds 5 to 10 yards of 50-pound-test fluorocarbon leader and a 6/0 circle hook bridled to a live goggle-eye. Live blue runners are another productive sailfish bait, and Nelli also likes dead sardines. Live baits are kept in a bucket with an aerator or the kayak’s livewell.

“The key is to stay tight on the fish once you’ve hooked up,” Nelli explains. “Keep your kayak pointed at the fish and hold on for the first five to 10 minutes and enjoy the show. After they have used up some energy jumping and you’ve gained some line, the fight will be close to the ‘yak and will stay that way until you put the heat on and grab the bill. I have had some not give up for 45 minutes, and others after only 10.

“You have to be aware of what you’re doing at all times,” he adds. “A simple mistake can cost you a trophy. Try to whip the fish as soon as possible in order to ensure a successful release.”