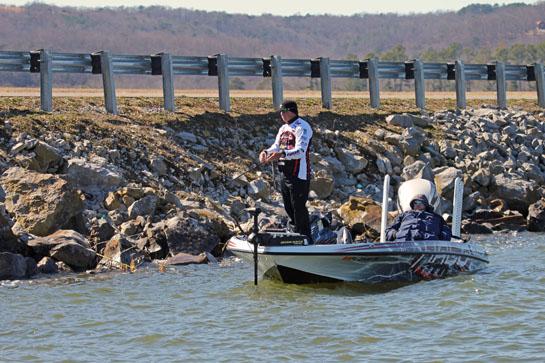 In the wake of last weekend’s Bassmaster Classic, a couple of angling axioms merit attention. First, muddy water doesn’t necessarily flush the whole party. We’ve all heard about the big storm that blew across Lake Guntersville and turned a lot of the common fishing areas to chocolate milk. But as the new champ Randy Howell and several others demonstrated, you can’t let adverse conditions doom your day.

We won’t rehash all that’s been reported, but it’s worth noting a few points relevant to, not only the recent Bassmaster Classic, but muddy water and spring conditions anywhere.

Grass beds filter water and areas with lots of vegetation tend to clean up a little faster than bare bottom.

There’s always a leeward shore, a protected cove or tucked-away pocket where you might just find some nicer conditions.

Prudent bait choice can greatly benefit your efforts. Jason Christie, who placed third and fourth the first two days before struggling in the final round, caught a lot of fish on an Xcalibur XR50 rattling lipless crankbait, but in the dirtier water, the larger profile of an XR75 created more vibration and displacement and the fish had an easier time finding it.

Similarly, Howell’s main bait – a medium-diving Livingston crankbait sports not only rattles, but an internal circuit board that emits recorded sounds of distressed baitfish.

Another thought: In the post-event press conference, Howell made a very interesting point that anyone who’s ever felt intimidated by the notion of professional fishing should consider. He kind of chuckled as he admitted that much of his final day’s effort was directed at a riprap bank in plain view – the same kind of stuff that the average weekend angler might fish.

He said that respectfully. No slight to those with limited fishing time. In fact, that’s just the point.

Howell, Randall Tharp and several others ran a lot of crankbaits and twitched a lot of jerkbaits over those manmade piles of chunky rock; no doubt tracing a path over which countless locals have fished throughout Guntersville’s history.

Does this game get complicated? You bet it does; just not always.

Sometimes, a banner day is waiting right there in plain view. Unquestionably, guys like Howell, second-place finisher Paul Mueller, Tharp and Christie know a lot more about tricking bass than the average fisherman – they deserve that credit. But each of these guys know that there are times when they make the same kinds of cast to the same kinds of structure that the average weekend angler might make.