Lessons from Lake El Salto: How to Catch Pressured Bass

Photographs by Alex Robinson Not everything that happens in Mexico should stay in Mexico. Lake El Salto might be the... 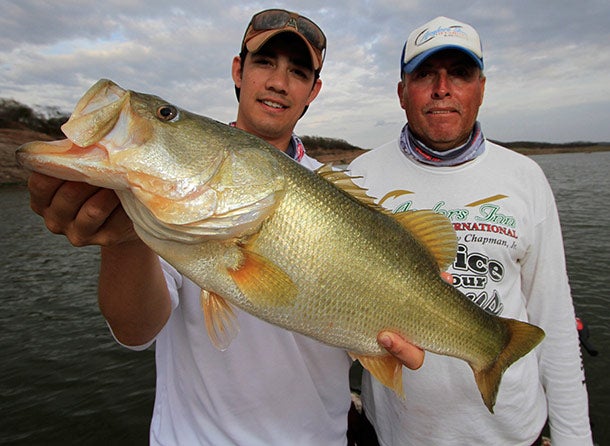 Not everything that happens in Mexico should stay in Mexico.

Lake El Salto might be the best place to catch the biggest bass of your life, but don’t head down there expecting to find virgin water. The 14,000-acre lake, located 800 miles from the U.S. border, has a reputation as a premier destination for trophy largemouths. Every summer it draws flocks of anglers that even the drug war hasn’t deterred. Outfitter Billy Chapman says he’s hosted up to 3,000 fishermen a year, and he’s one of only three on the reservoir.

I spent a week at El Salto (where 10-pound fish were a weekly occurrence) last summer with Mark Sexton, who helped design Berkely’s popular Havoc line, and got a tutorial on targeting trophy bass that are under high fishing pressure. Our Mexican guides, who spoke very little English, brought us to the same spots every day. We were armed with the most basic bass rigs: swim jigs, crankbaits, Texas-rigged worms, and spinnerbaits.
It was up to us to figure out how to get the biggest fish to strike. Here’s what worked.

Start With What You Know
We used a small selection of baits because they were proven to work on El Salto. I learned this the hard way when, to my guide’s objection, I tossed a jerkbait for an hour at schooling bass without a single strike. Sexton’s key was to start with the proven baits and modify them slightly—size or color pattern—until he triggered more strikes. “You should always be tweaking your bait or your presentation, but never change more than one variable at a time,” Sexton says. If you know that you’re on fish, give a presentation and bait about 30 minutes before swapping it out.

Burn a Jig
The most effective big-fish bait for us was a jig-and-pig, but the classic retrieve—slowly yo-yoing the jig back to the boat—didn’t turn them on. Instead, Sexton advised me to pitch it, let it sink, and then swim it back quickly, like a spinnerbait, burning the jig over, through, and around cover. “It’s something the fish haven’t seen a lot of, and with high-pressured bass, you need to show them something that looks different than what they’re used to, but that still looks like food,” Sexton says. The fast retrieve also gives bass less time to see the presentation.

Get Deep
Fishing pressure and boat traffic will send bass deep, so during the late morning we’d go after them with crankbaits. The goal was to get the bait as deep as possible for as long as possible. We’d cast as far as we could and quickly crank the bait to the bottom. During the retrieve, we dipped the first few rod guides in the water to keep the bait down. (You can help yourself out by using at least a 7-foot 6-inch, medium-heavy rod paired with a reel that has a slow gear ratio—somewhere around 5.4:1.)

Follow Up
Don’t be afraid to fish a spot just because another boat has already worked it. If anglers in other boats seem to be weekend-warrior types (constantly working out backlashes or casting into the trees), plan to fish a spot after they leave it. Sometimes another boat can actually set the stage for you to hammer the fish, Sexton says. Hitting the best spots during the feeding windows is more important than avoiding other fishermen.