The massive mudslide in Washington has done untold ecological damage to Stillaguamish River, one of the best-known salmon and steelhead... 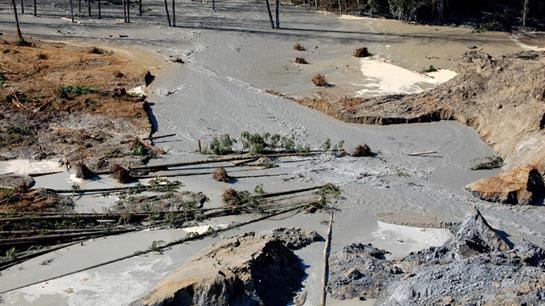 The massive mudslide in Washington has done untold ecological damage to Stillaguamish River, one of the best-known salmon and steelhead rivers in the Northwest.

The most severe damage comes to the river itself. More than 45 miles of the once pristine river is now stained dark from silt. Waters stand almost stagnant as the mudslide formed a dam that blocks water from moving. A pumping system installed to aid in search efforts spews a constant stream of sewage and chemicals escaped from devastated homes and capsized automobiles.

All of this runoff has done incredible damage to salmon and steelhead spawning beds. And, it could take decades for the river to return to normal.

Oso, Washington resident Bill Best was stoic when he told Reuters, “Hopefully in 20 to 30 years, it will be back to what it sort of used to be.”

Washington Department of Ecology spill responder Dick Walker said that salmonids, including Chinook salmon and steelhead trout, along with their eggs are most likely dead.

This is a far cry from what famed outdoor writer Zane Grey wrote of the area a century ago: “What struck me at once was the wonderful transparency of the water. Deer Creek was the most beautiful trout water I had ever seen. Clear as crystal, cold as ice.”

Hopefully, the river can return to a similar state in the near future.