Sara Palin once said the only difference between a soccer mom and a bulldog is lipstick. Okay, I’m not going... 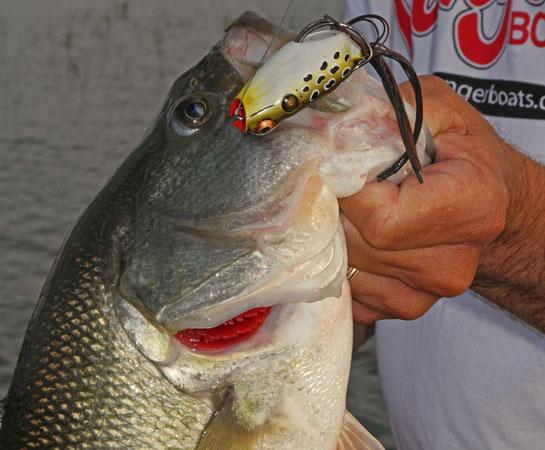 Sara Palin once said the only difference between a soccer mom and a bulldog is lipstick. Okay, I’m not going political here, but interestingly enough, the former Alaska governor’s meaning actually bears a timeless truism that’ll help you catch more springtime bass.

Palin referred to a simple principle we should all respect: Don’t mess with the young’ns.

In the bass world, the males are kind of the soccer moms, at least during the postspawn stage where bucks guarding fry get props for equally fierce dispositions.

For crappie, bluegill, catfish or anything else with a taste for tiny bass, this means back off.

For anglers, it means a great opportunity.

Texas pro Cody Bird will use a swimbait to search broad areas to find fry-guarders, which invariably disclose their position by swirling or swatting at the intruders. Once he locates the nursery, he’ll send in the shaky head with a Kickerfish Baits High Tail Hole Shot worm — a subtly obnoxious intruder that those proud papas just cannot stand.

Good thing about a topwater frog is its ability to float in one spot. If you can dial in where those fry are holding — usually against some hard structure — and pause your frog right there in the nursery, you can just about call your shots.

With any postspawn tactics, be sure to carefully release your catch. Postspawn aggression offers memorable strikes and battles, but remember these fish have an important job to do: giving the next generation of rod-benders a chance to grow up.