I was on a photo shoot in the California Delta with Western standout Jimmy Reese (yep, Skeet’s bro) and his... 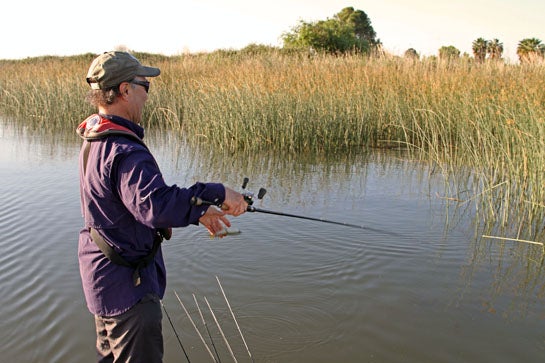 I was on a photo shoot in the California Delta with Western standout Jimmy Reese (yep, Skeet’s bro) and his tournament practice partner Gary Haraguchi, when I noticed something interesting on the back of the boat.

Haraguchi is an experienced bass tournament co-angler, so I was stoked when I found out that he’d be joining us. Expecting a few innovative tips, I kept one eye on him while interviewing Reese.

Sure enough, Haraguchi did something unique with the trout-imitating swimbait he tied on. Instead of making the long, bombing lobs that Reese would make with his swimbait, Haraguchi held the bait’s aft end in his left hand, pointed his rod tip at the tules we were tracing, and pitched the bait into pockets and gaps amid the sparse stalks.

When I asked Haraguchi about his employment of a technique typically used for presenting jigs or Texas-rigged plastics, he said, “As a co-angler, you have to work with whatever space your have, based on what your pro is doing on the front of the boat. Sometimes, there’s just not enough space for a traditional cast, so you may have to pitch (various baits).”

By day’s end, Haraguchi had pitched a swimbait, buzzbait and squarebill crankbait with the same dexterity he displayed with his Texas-rigged creature bait.

Note to self: Don’t pigeonhole any presentation. Use what fits the scenario.