Suffice it to say that putting this bait in Howell’s hands a day before the competition on Lake Guntersville commenced... 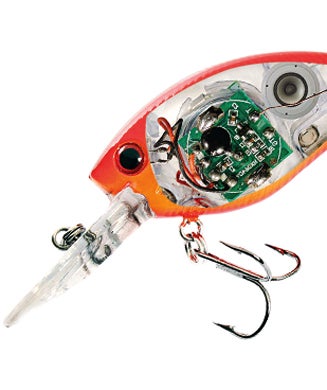 Suffice it to say that putting this bait in Howell’s hands a day before the competition on Lake Guntersville commenced was a great move. But the technology that makes this bait unique has game-changing potential for anglers of all skill and experience levels.

REAL-DEAL APPEAL
The Howeller features a trio of bass-tempting attributes. First, this medium-diver’s lip begins rather narrow and then flares outward. This pushes a lot of water and causes a wide wobble and intense vibration that Howell says shakes the rod tip like a bladed jig. The bait also features high-frequency rattles in weight-transfer chambers that allow the beads to slide rearward in the lure on the cast for maximum distance, then slide forward when the bait turns nose-down on the retrieve.

These are beneficial features, no doubt, but headlining this show is an internal circuit board and sound chamber that plays real-life recordings of distressed baitfish. (Anglers can hear the sound by wetting their thumb and forefinger and touching the contact points at the hook mounts.)

This Electronic Baitfish Sound (EBS) plays upon a bass’ natural predatory instincts, according to Livingston founder Robert Castenada. “All fish make sounds in the water,” he says. “It may be quiet above the surface, but below there is an entire ecosystem. We’ve found that bass respond best to the sound of distressed baitfish. They know the buffet is there, so it’s an easy meal.”

“I’ve seen that in the bass tanks when I’m doing seminars,” says Howell. “You have this bunch of fish sitting over there in a corner. I’ll throw a Livingston bait in there, and when they hear that baitfish sound, they’ll all swim over to check it out.”

A SOUND STORY
Castenada explains the concept: “I used to fish with live bait, and I noticed that when I rigged a live shad, it made a distress noise, which I discovered was their gill plates compressing against their air bladder, resulting in a burp or a croak. That sound is how predatory fish home in on an easy meal.”

The notion of mimicking that sound teased his creativity for years, until Christmas 2001 delivered the missing piece of the puzzle. A holiday card from his sister was designed to play “Jingle Bells” upon opening, but Castenada heard something very different–the sound of baitfish emanating from fishing lures.

“I literally jumped up off my easy chair and said, ‘That’s it!'” he recalls.

In a classic “Aha!” moment, Castenada cut open the card’s sound chamber, pondered the tiny recording mechanism, and boom–the Livingston Lure was conceived. Prototypes were many and design inspiration percolated, but the driving premise was clear from day one. “I took [the card’s] chip out and said, ‘If I can record the sound of injured baitfish on this chip and stick it into a hard-plastic lure, I’d have live bait year-round,” Castenada says. “I was frustrated going to bait shops or throwing a cast net and not having the size baitfish that bass were foraging on.”

PLAYING THE RIGHT TUNE
What started with Castenada simply listening intently to baitfish in a bucket led to his early efforts to record their sounds by holding a microphone near the container. This later advanced to underwater audio recordings in areas where bass were preying on baitfish. Castenada used audio recording software to perfect the sound with the precision of a producer sweetening the title track for a hot new artist’s debut album. After extensive testing, he arrived at the sound that most effectively attracted bass. What might sound like a cricket’s chirp to the human ear is interpreted by bass as the sound of baitfish in distress. Along the way, Castenada immersed himself in all things auditory. Helpful, he says, were reports such as “Effects of Mid- and High-Frequency Sonars on Fish,” by the Naval Undersea Warfare Center Division, and “Directional Hearing in Fishes,” by Loyola University’s Richard R. Fay.

Micro-electronics had not yet evolved to the level he needed, but Castenada bird-dogged his vision until a workable product emerged in 2008. Partnering with an investor broadened the company’s horizons, and now Livingston is on course to expand its EBS technology to include interactive options, set to debut shortly.

No doubt, the proof is in the pudding, and Castenada has independent research to back up the 12 years he’s spent observing the Livingston Lure’s effect on largemouth and smallmouth bass. Through a recent partnership with fisheries biologists, Livingston is pursuing scientific research indicating that EBS technology increases strikes 5-to-1 over traditional rattles and beads.

WHEN IT’S BEST
So, when is the sound of forage most helpful? “I think [baitfish sounds] will appeal to bass pretty much year-round because that triggers their natural instinct,” says Howell. “But I think it makes even more of a difference in cold water, like we had at the Classic, than in warm water, when fish are more active.

“You never completely know what fish think, but when they react to you and you catch them better–even if it helps you catch one or two more, it’s worth it.”

Howell says he also expects those Livingston lyrics to charm bass during the spring shad spawns. Loads of little baitfish swirling in the shallows attract serious predatory attention, and a bait that not only resembles but also sounds like the real deal should be an easy sell.

“We’re just making lures sound more natural,” adds Castenada. “We’re providing the sound that bass have been used to hearing since before man walked the Earth.”