Like many anglers, I’ve developed a bucket list of must-catch fish species over the years. Whether elusive, colorful, powerful, acrobatic,... 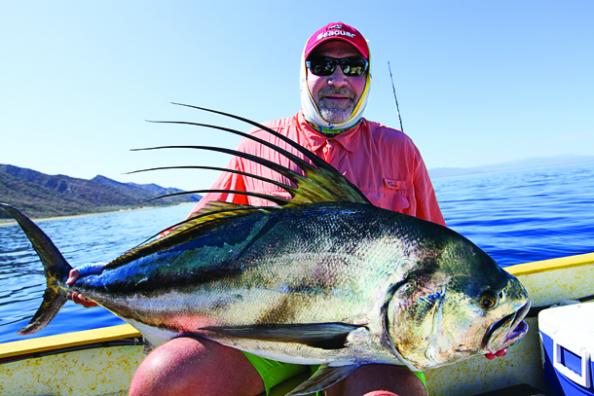 Like many anglers, I’ve developed a bucket list of must-catch fish species over the years. Whether elusive, colorful, powerful, acrobatic, or just plain odd, each entry is unique. The roosterfish has always topped that list, and that is what brought me to La Paz, Mexico, and the Sea of Cortez. Dubbed “the aquarium of the world” by French oceanographer Jacques Cousteau, Cortez’s waters teem with the baddest roosterfish in the world. Members of the jack family, roosters rarely wander far offshore. Amply muscled and agile, they are characterized by endurance, an unequaled nasty demeanor, and the sportfishing world’s most unusual dorsal fin–seven long spines that resemble a rooster’s comb.

Putting On the Ritz
While in La Paz, I was the guest of Mike “The Griz” Ritz, a hybrid of Mike Ditka and a camp counselor, with the physical stature of a sidewalk Salvation Army Santa. A degreed biologist, he is the owner and operator of Adventures South of the Border (asobonline​.com), arguably the top U.S. guide operating in Mexico. Even more important, he shares my appreciation for roosters. “No other fish swimming in the salt pulls pound for pound like the rooster,” says Ritz. “They’re high-horsepower machines.” As is the case with many species, local knowledge is essential to success. “The water is incredibly deep right near shore,” Ritz says. “This makes run times short, but locating and accessing the giants is no easy matter. They’re also wily, which just adds to the mystique of conquering them.” The program was to drift and troll 6- to 8-inch sardines on 1/0 to 2/0 hooks. After days spent making tactical drifts and pulling baits, I had managed to miss three fish. In each instance, my rooster naivete cost me dearly. On the last morning, I would get a final chance.

On our first trolling pass, the portside bait nervously snapped to attention, indicating that a rooster was on the prowl nearby. After a crisp bump and a few temple-­pounding, free-spooling seconds, I threw the strike lever, ratcheting the spool tight.

The rooster’s counter was harsh. Chomping down hard on the circle hook, the fish seemed to focus its attention on finding safety on the bottom several hundred yards below. Just then I realized I’d bridled something I might wind up wishing I hadn’t. My arms felt as if they would soon be freed from their sockets. I could not kick a fleeting thought: So this is how it’s all going to end. Dragged into the depths by a fish. After pounding me from stem to stern, the fish finally breeched. He seemed to flare his fins in defiance. Fitting, really. After standing toe-to-toe with a 65-pound thug, I am convinced the rooster is deserving of his coronation as heavyweight champion.