Algorithm from FishBrain App Looks to Predict the Next Bite

Every angler has his or her favorite set of fishing conditions, and now an app called FishBrain is compiling all... 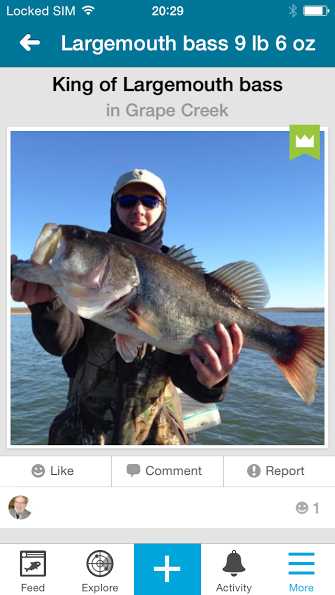 Every angler has his or her favorite set of fishing conditions, and now an app called FishBrain is compiling all of those fishing variables, plugging them into a complex algorithm, and predicting when the next best bite is going to happen.

FishBrain collects data from all of its 600,000 registered users (450,000 of them are in the U.S.) and uses that information to power its FishBrain Forecast. Users upload a photo of a recent catch and input data about the species, the bait, and the fishing method that landed it. The app automatically pulls in the location and 10 different weather variables. The app relaunched on the App Store earlier this week, and is available for iPhone and Android devices. So far, it has recorded more than 225,000 catches from around the world.

The app is a huge repository for some cool fishing photos. You can find data on different bodies of water and it allows you to follow other anglers (think Instagram, but only fishing photos). Still, the new forecast feature is the most intriguing thing about the app.

The theory behind FishBrain Forecast is similar to the principle behind solunar tables, which consist of a set of tables that predict the behavior of fish and animals in relation to the moon, and suggest the best days of the month and times to fish and hunt depending on the tides, sunrise, and phases of the moon.

Only now this prediction is created from crowd-sourced data collected from hundreds of thousands of anglers across the world.

“The new FishBrain Forecast is a genuinely revolutionary tool for anglers: Never before has there been such a simple and accessible way to maximize the potential success of a fishing trip. We are excited to be able to offer an updated alternative to the solunar calendar theory, which is over 90 years old,” says FishBrain CEO Johan Attby.

Will you be able to simply fire up the FishBrain app and immediately start setting hooks? Not exactly. But, when utilized properly, the app could be an extra tool to add to your fishing arsenal in this age of big data.