On June 4, Tim Kelley hooked and landed a 13 pound, 7 ounce rainbow trout, in a quarry pond on... 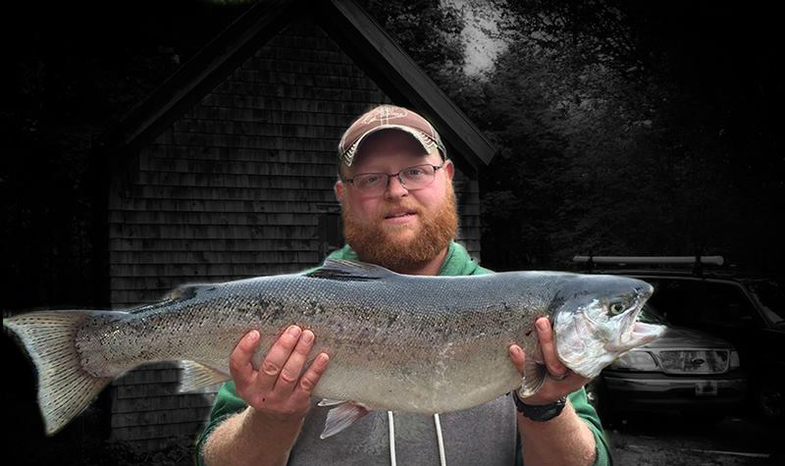 On June 4, Tim Kelley hooked and landed a 13 pound, 7 ounce rainbow trout, in a quarry pond on Vinalhaven island, about 15 miles from mainland Maine. It measured 32.5 inches long, and bested the previous state record by just over five pounds.

Kelley lives in Arkansas, but was visiting Vinalhaven to stay with family, and wanted to do some casual fishing while he was in town. He told Bangor Daily News he “bought a cheap $25 trout rod from Walmart,” along with a few spinners. He and his friend Mike Seeley were casting from some rocks when the fish struck.

It took Kelley a while to tire the fish on light tackle, but his real troubles began when it finally came close to the shore.

Kelley told the newspaper his friend “got in the water…and tried to ease [the fish] into his arms. When that happened, the line broke.”

At Seeley’s urging, Kelley jumped in the pond to help him corral the listless fish before it made a break for deep water. The fish kicked its tail, “went about five feet out, and started rolling on its side a little bit,” he told Bangor Daily News. “That’s when I finished jumping all the way in.” He managed to get his arms around the fish, and “kind of bear-hugged him out.”

Seeley was so impressed with the size of Kelley’s fish, he told him, “I’ll smack you if you don’t get that mounted.”

Wes Ashe of the Maine Department of Inland Fisheries and Wildlife was impressed not only with the fish’s size, but that Kelley caught it at all. He wrote the pond was not even known to contain rainbow trout.

Get more details by reading the full story at Bangor Daily News.