Banking on Bass: Tips for Fall Fishing the Bluffs

Jimmy Mason knows how to catch Tennessee River bass in the fall, and he’s taking that theory to the bank—literally.... 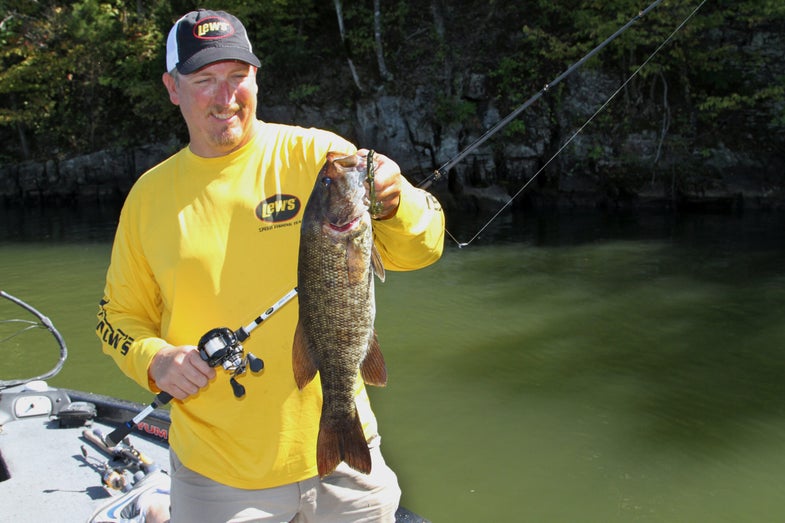 Jimmy Mason knows how to catch Tennessee River bass in the fall, and he’s taking that theory to the bank—literally.

“As the water cools in the fall through winter, many of the fish are going to move to those vertical banks,” Mason said. “Bluffs are a big pattern this time of year because the fish are able to move up and down and change depths with shorter moves. By comparison, on a flat bank, the fish will have to go a long way to make a 10-foot vertical move. Whereas on a bluff, it’s basically just a 10-foot move.”

Food also holds a heavy influence on these fall fish. Mason notes that with lots of crawfish and baitfish moving tighter to bluffs, the bass find plenty of opportunities to fill their bellies.

Early fall finds Mason paralleling the rock walls with crankbaits like Bomber’s 6A, 7A, or Deep Flat A. He’ll also throw jerkbaits like the Smithwick Rogue, along with umbrella rigs like the YUM Flash Mob or Flash Mob Jr. and a light Texas rig with a YUM Christie Craw.

“If I had to pick one presentation it’s going to be the shaky head and the finesse jig,” Mason said. “Day in and day out, it’s hard to beat them. You might not catch as big of a fish as the other techniques, but you will catch more fish with a shaky head and finesse jig.”

With these latter two baits, it might be tempting to just toss a jig toward the bluff and work it back to the boat, but Mason advises against such incomplete presentations.

“Whenever you’re working your jig, you always want to fish it on a slack line,” he said. “Picture a series of little stair steps and when it comes over a step, you want to give it a little line so it falls vertically.

“If you keep a tight line when it falls from step to step, the bait is going to pendulum out. But giving it slack line, it’s going to fall straight and that will get you way more bites in the fall.”

Now one bluff wall may seem just as potentially productive as the next, but Mason advises looking for fish-friendly spots like cracks/crevices, rock slides, and transitional banks where one type of habit merges with another.

Bass like these subtle changes, but one thing remains constant: Bluffs are a good bet for fall fishing overall.