“Now, that ain’t chopped liver.”—Jimmy Durante, 1954 The Great Schnozzola certainly wasn’t alluding to catfish when he coined his now-familiar... 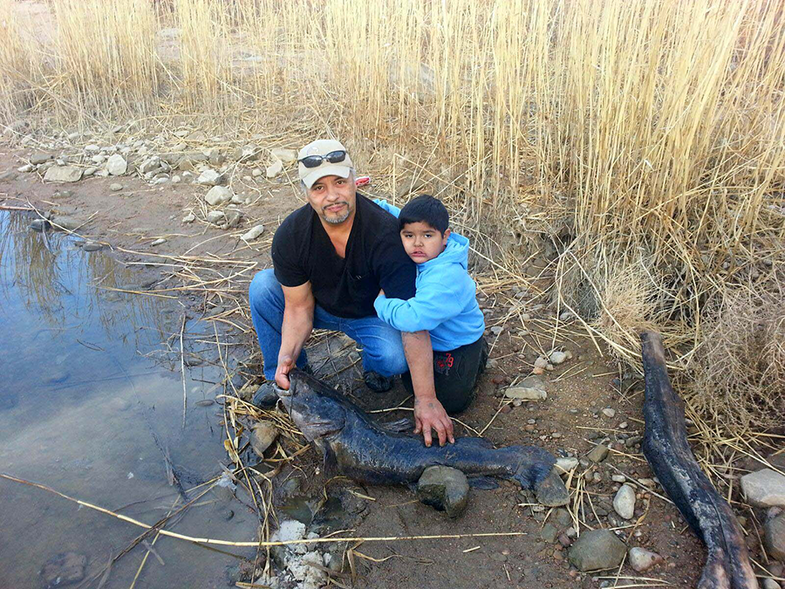 The Great Schnozzola certainly wasn’t alluding to catfish when he coined his now-familiar phrase, but he might as well have been talking about La Junta, Colorado angler Tony Chavez who last month chicken-livered his way to the new state-record flathead catfish. The big John-Martin-reservoir fish weighed a whopping 27 pounds, nearly doubling the previous record of 15 pounds, 6 ounces. Although the flathead world record stands at 123 pounds and 50-pounders are somewhat commonplace in Midwestern waters, they are relative newcomers to John Martin where they have been stocked sporadically since 1994 after being acquired from Arkansas.

Meanwhile, in North Carolina, Jeff Manning of Gastonia came within just 7 pounds of breaking the state record with his 82-pound blue cat caught on Lake Wylie. After a quick measurement and photo, Manning released the big blue.

“During cold weather, the shad concentrate in deep water, and blues are there with them,” Ferguson said. “When the weather warms, the baitfish and the catfish scatter.”

The current world record blue catfish was caught in Buggs Island Lake in Virginia in 2011 and weighed 143 pounds. This was the last of multiple fish that have shattered records since 2004. It seems that every two years another massive blue comes along and takes the crown.

There’s speculation that the 150-pound mark will be broken soon. There are quite a few waters that hold serious world-record potential.

The Red River, along the Texas/Oklahoma border is one candidate. The river runs through Lake Texoma, home of one of the former world records. Its shallow waters require an airboat to navigate and it sees virtually no fishing pressure above or below Texoma. There are miles of river that hold monster blue catfish.

The Mississippi River is home to miles of monster blue catfish and has produced world records as well. There’s no secret that it’s a hotspot for big blues. Keep a close eye on the water around New Orleans though. There’s virtually no publicity given to this area but it’s got serious monster-fish potential.