Fish Shell Beds for Summer Bass in a Hurry

With a 250 Yamaha hanging on the transom, Cliff Prince’s 20-foot Phoenix bass boat will hit 75 mph, but when... 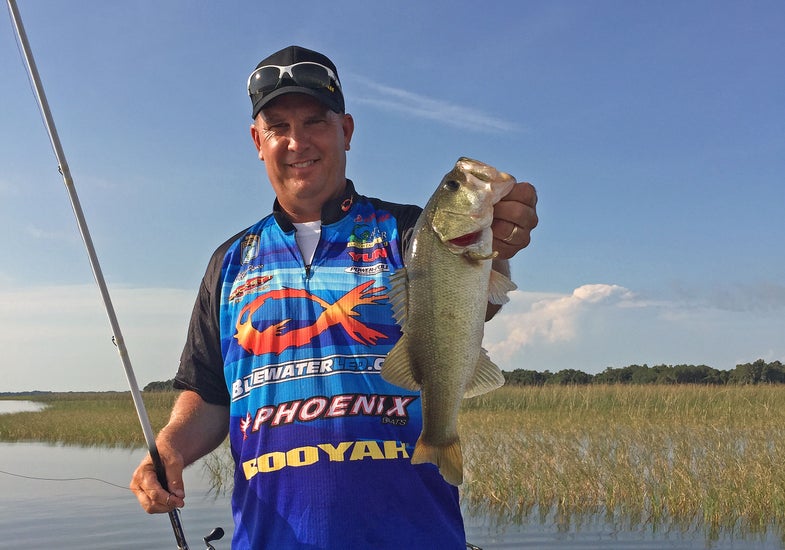 With a 250 Yamaha hanging on the transom, Cliff Prince’s 20-foot Phoenix bass boat will hit 75 mph, but when I fished with him last Tuesday, there was little need to show off his speed.

Prince, a Bassmaster Elite Series pro, and I had teamed up for a pro-am bass tournament on Lake Toho a day before the opening of ICAST 2015 in Orlando, Fla. Our primary target: a shell bar just off a boating lane about a mile from the take-off site.

Now, we didn’t win the tournament, but Prince’s strategy was definitely a good one. While many of our fellow competitors ran to distant locations for the proverbial hog hunt – few of which panned out – we spent the majority of our time actually fishing.

Tossing mostly dropshots and Carolina rigs, we bagged our 5-bass limit, with a couple of culls, and made a respectable showing.

But the outcome of a bragging-rights tournament is hardly the point. What’s relevant is the notion of time management.

For serious competition, or casual fun fishing days, making the most of every moment demands prudent site selection. This is particularly true for summer, when extreme heat and dependable thunderstorms make much of the day unproductive, if not unfishable.

All things considered, the shell bed habitat has a lot going for it.

—Baitfish tend to gather around shell beds for the algae and other food sources. Summer’s heat pushes bass into and under vegetation by mid morning, but the first few hours after daybreak find the fish roaming around to find breakfast. They won’t miss any forage concentrations.

—Shell beds typically form high spots on the bottom and any such relief is a natural bass attractor.

—It’s stealthy. On crowded bass lakes, where curious eyeballs are always watching, no one will see specifically what you’re fishing or how you’re setting up on the target zone. Unlike a dock, a laydown or standing timber, shells are not immediately visible.

It’s certainly not the only game in town, but if you only have a few hours on a shallow southern lake, a shell bed has a lot to offer.