During a recent photo outing on Lake Guntersville with Alabama pro Jimmy Mason, fellow photographer Chris Brown and I climbed... 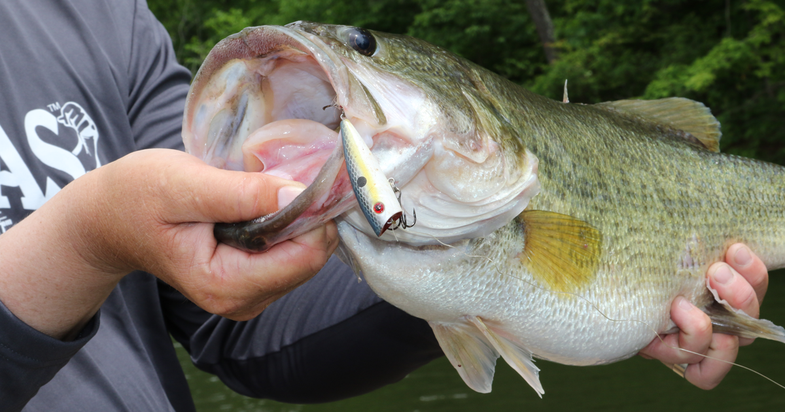 During a recent photo outing on Lake Guntersville with Alabama pro Jimmy Mason, fellow photographer Chris Brown and I climbed ashore to shoot our host casting toward the bank cover. When Chris spotted a nice bass right below us, we guided Mason to the fish he couldn’t yet see.

As his pitches got closer to the fish’s stronghold in a shadowy cavern behind three dead branches and foliage, the fish began to get agitated, making several aggressive runs at the Texas-rigged craw.

To put it mildly, this fish was red hot. Typically, bass chilling in the shade emanate a more casual vibe, but this one made a sharp about-face to snap at the bait each time it entered the sanctum.

A closer look revealed the motivation: hundreds of half-inch spawn nervously hovering in the shadows.

This bass was a “fry guarder.” Suffice it to say, such nursery sentries take their jobs seriously, and that’s why capitalizing on the fry pattern is such a great way to catch bass.

Usually clustering around a piece of wood, weeds, or anything that’ll hide a bunch of clueless youngn’s, the fry don’t stand a chance against any bluegill, crappie or other predator that finds them. That’s why you’ll never see a more animated phase of a male bass’s life than these critical days.

You might get a fry guarder to nip at a little dead-sticked worm, but you’ll do better with something intrusive, noisy, threatening. Try poppers, topwater frogs, wacky-rigged Senkos and even shaky heads that stand in the middle of fry like some playground creep.

Remember, papa’s on guard duty, so the more threatening the appearance, they more likely he’ll attack.

Photograph by David A. Brown