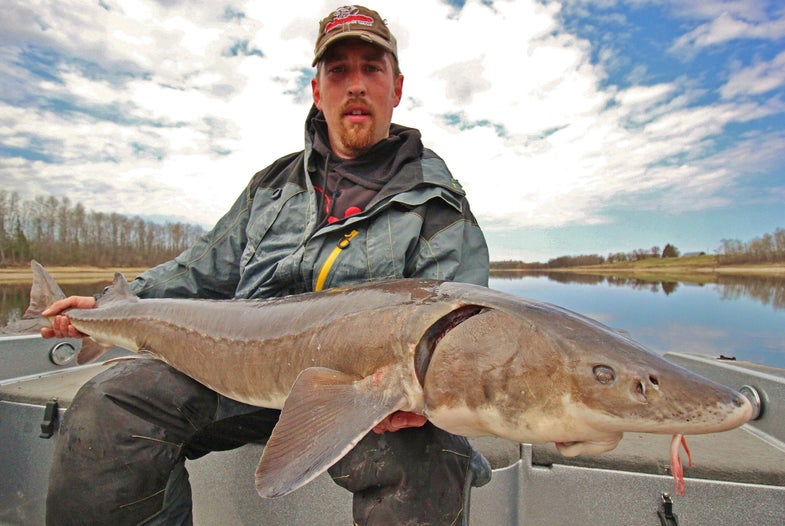 Lake sturgeon, those armor-plated bottom feeders, are pretty docile critters—until you stick a hook in their mouth, that is. Then it’s game on. In this and a subsequent blog, we’ll talk about how to catch these incredible fish with Chris Granrud of Rainy Daze Guide Service on Minnesota’s Rainy Lake.

“The lake sturgeon is considered by many to be one of the strongest fighting fish within the freshwater system,” Grandrud said. “Up on the Rainy River, the lake sturgeon has taken root and anglers are enjoying the incredible tug of a prehistoric fish sometimes surpassing the 100-pound threshold.

Granrud suggests adding a lake sturgeon tug-of-war to your bucket list. But first, he has a little advice for those who undertake the challenge:

Location
About a decade ago, when Granrud set up shop on Rainy Lake, an area he chose on the Minnesota/Canada border for its vastness and habitat diversity. With regards to sturgeon, Granrud points out that the Rainy River system (linking its namesake lake to Lake of the Woods) covers nearly 50 meandering miles with deeper adjacent holes, which commonly attract these fish.

“Fish will often be found lying on the bottom, facing upstream,” Granrud said. “We like to search areas utilizing our side scanning features of our electronics prior to fishing.”

Baits
Sturgeon like it stinky, so Granrud will thread four or five nightcrawlers on a 1/0 hook and cap the deal with a gut-hooked minnow.

“The minnow adds scent to the offering as well as deters undesirable species from stealing the angler’s offerings,” he said.

Stay tuned for a look at rigging, tackle, and catch-and-release.