When it comes to brute power, few fish can challenge the lake sturgeon. Last time, Chris Granrud of Rainy Daze... 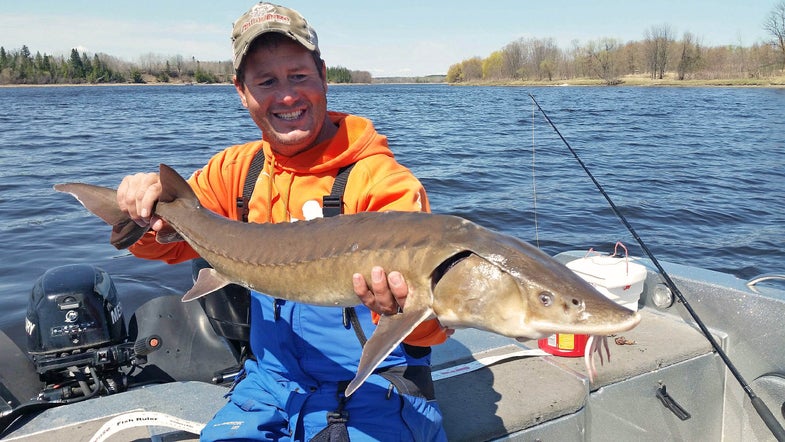 When it comes to brute power, few fish can challenge the lake sturgeon. Last time, Chris Granrud of Rainy Daze Guide Service on Minnesota’s Rainy Lake, gave us a couple of pointers on likely locations and popular baits. Here, Granrud takes us through his tackle preferences and the parting farewell.

Sturgeon hardware is a key detail for Granrud and his game starts with a Shimano Convergence 8-foot medium-fast action Muskie rod with a soft tip, an Abu Garcia Ambassadeur C3-6500 spooled with 50-pound braid and a 50-pound fluorocarbon leader. He’ll use stout 1/0 hooks, no-roll sinkers (weight according to current level) and 50-pound swivels between line and leader.

“I remind anglers that their gear is only as strong as its weakest link,” Granrud said. “Inadequate gear can quickly be decimated by the power of these fish.”

“We like to leave a 15-inch space between the swivel (linking main line to leader) and the hook,” he said. “Too large of a snell between the sinker and the bait will elevate the bait out of the strike zone and move the offering back and forth too swiftly and mar the presentation.”

Also, Granrud uses two anchors to establish a lateral position relevant to the fishing area. This allows him to fish multiple anglers off the side of the boat.

“Otherwise, a river anchor with a small chain allows the anglers to fish directly out of the transom of the boat,” he added.

Catch-and-Release
Minnesota’s regulations include catch-and-release and permitted harvest seasons of one fish per angler per day. Whatever your plan for the day, Granrud stresses a few important details.

Anglers should research Minnesota fish and game regulations or contact licensed guides for seasonal details, he said. You should also have a large net that is capable of safely landing these massive creatures.

“This allows the fish to remain in the water safely as you dehook your catch. If you’re practicing catch-and-release, the fish can remain over the side of the boat and in the water while recovering before release.”

Remember, these magnificent fish are not as indestructible as they may seem. Handle with care and avoid touching the eyes or the gill area.

“Should you choose to photograph and measure the fish, you will want to grip the fish just above the tail with one hand while utilizing your other hand to support the underside of the belly,” Granrud said.

Snap a couple of hero shots and gently slide your sturgeon back into the water. Just make sure the fish is fit to kick off on its own power. You definitely want these dinosaurs to survive and fight another day.