Hogging All the Fun with Hogfish

They used to be something of an elitist fish; a species taken almost exclusively by deep water spearfishermen. However, recent... 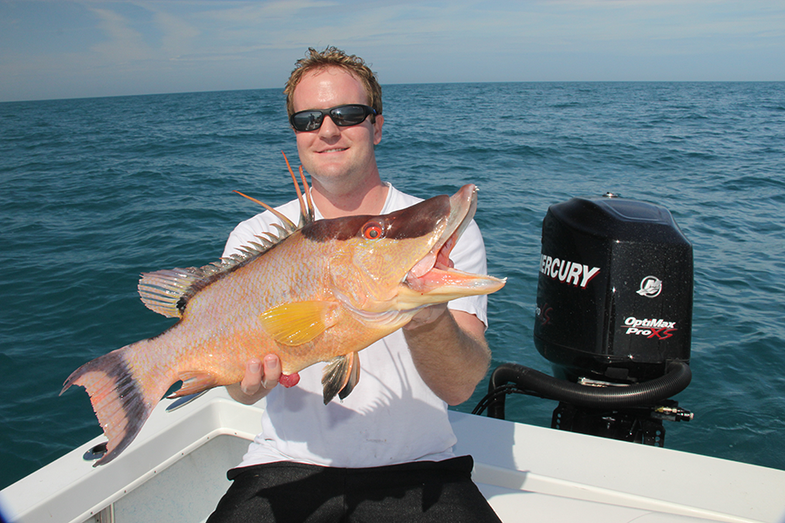 They used to be something of an elitist fish; a species taken almost exclusively by deep water spearfishermen. However, recent years have seen recreational hook-and-line anglers in the Gulf of Mexico figuring out how to catch Lachnolaimus maximus—often within clear eyesight of the beach.

Well, hogfish may have seen some dwindling in their esoteric status, but they’ve lost nothing in the “cool” and “tasty” categories.

A truly funky looking species, hogfish sport gaping jaws, prominent front teeth, long dorsal rays and striking colors. The females are reddish-orange with a subtle dark band on the tail and forehead, while the more vibrant males display a prominent brown band from the snout to the dorsal, a brown stripe along the back and dark bands on the ventral and tail fins.

Divers report the males using their extreme jaw spans for territorial confrontations, kind of like a dental sumo wrestling match.

Biologists tell us that the hogfish’s jaws also serve as scooping devices and the shell grit often found in their bellies supports the notion of shoveling up crustaceans and invertebrates off the bottom.

This is largely what prompted anglers to start carrying shrimp and fiddler crabs—common inshore baits out to the nearshore reefs. Dropping these baits around the reef’s perimeter is the key, as this is where hogs do their shoveling.

Hooked hogs put up a respectable fight, and you’ll want to have your camera ready for what may very well be the most photogenic fish you’ll ever catch.

And after a light grilling, baking or pan-searing, you may also term this the tastiest fish you’ve ever eaten.