How Cookies May Have Fueled Kevin VanDam’s Fishing Resurgence

Just when whispers of “he’s past his prime” began to surround Kevin VanDam’s lack of BASS tournament wins, the most... 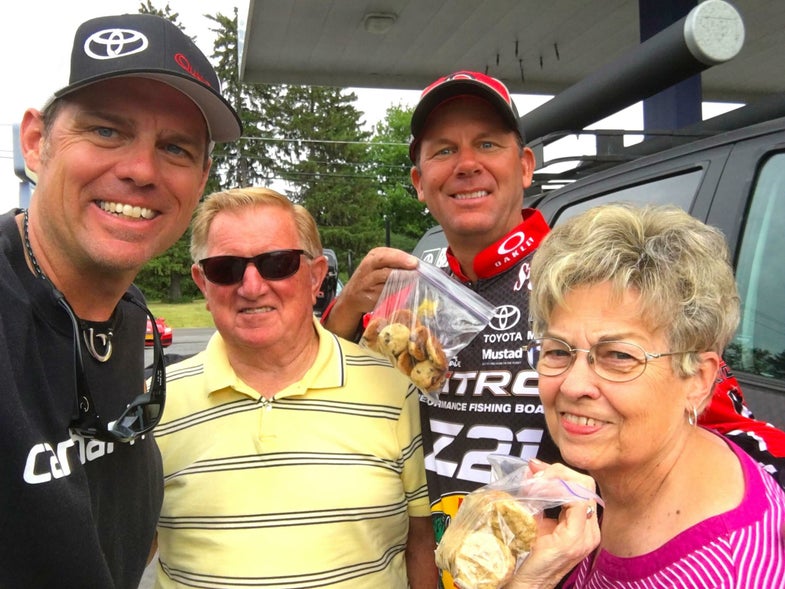 Just when whispers of “he’s past his prime” began to surround Kevin VanDam’s lack of BASS tournament wins, the most dominate angler of the past quarter century has quieted all the doubters with three sock-in-the-mouth 2016 victories—and the season ain’t over yet.

The key to his wins? Little could I have imagined that KVD would reference a cookie recipe I discovered on the shores of Lake Texoma 25 years ago as possible fuel for his newfound fishing fire the past few weeks.

Back in the summer of 1991, I headed 1,100 miles SW to the University of Oklahoma Biological Station at Lake Texoma.

I was a fisheries major, and it was a quick chance to pick-up 9 credits in two months. Much of the curriculum took place on, or in, the water. It was a fantastic experience.

Still, amid all that goodness, was a college kid with an accent that didn’t match that of several dozen other students he’d never met. Marge Smith, manager and queen cook of the tiny lakeside campus cafeteria recognized my loneliness, and took me.

Marge absolutely loved to fish, and she cooked things a kid from Western Pennsylvania had never tasted like fried catfish and okra. “Comfort food” on several levels.

And for desert—Ranger Cookies. I’d never tasted those either, but their unique blend of oatmeal, chopped pecans and rice krispies were among the best cookies this self proclaimed cookie monster had ever tasted.

At summer’s end, I carried Marge’s recipe home to my mom, Carole McGuckin, aka “Momma Guck.”

We lost Marge way too soon, but her memory and love are preserved in those Ranger cookies. And on the rare occasion that my mom and dad are able to join me at a Bassmaster Elite Series event, mom bakes about 130 Ranger cookies, separates them into tiny plastic bags, then distributes them to her favorite pros, and my media road-family brothers.

Gary Klein has always been a favorite of mom’s, so this year during the Toledo Bend event – she shipped a huge batch to my hotel just for Gary, and I hand delivered them to him.

Klein got the cookies, but Kevin VanDam got the win at Toledo Bend, and he did so in classic KVD fashion, deep cranking to catch the kind of quality fish that led to a mind-numbing 8-pound margin of victory.

It was the sort of steak-in-the-ground proclamation that he was back to his old ways. Fuel had been added to that dangerous competitive fire he’s known for.

Seven weeks later, Mom was with me at Cayuga Lake and gave VanDam a bag of cookies as he stood gassing-up his boat following Day One of competition. Three days later, he won again. Another blue Elite Series trophy, another $100,000.

In a post tournament interview, he was quick to pull a bag of cookies from his cooler, and suggested that perhaps the cookies were cause for his second victory in seven weeks.

The win gave VanDam the top seed for the unique 8-man Bassmaster Classic Bracket event on the Niagara River near Buffalo – a short three-hour drive from Mom’s kitchen.

Not only did Mom share her cookies on the eve of competition with VanDam, but Jacob Powroznik and Jordan Lee too. Bashful, she posed for a photo with the three of them, and Powroznik stated, “Guck, don’t just take our photo with your cell phone, use your big camera – Mom deserves the best.”

Over the next three days emcee Dave Mercer got cookies, so did my brother in arms and ace photographer James Overstreet, as well as the entire video team onsite to shoot for ESPN2.

In the same way the cookies were ‘comfort food’ to me when Marge baked them during my college days – Momma Guck’s cookies were sincerely appreciated by a bunch of grown men that spend way too many days away from home doing a job they love.

On Friday afternoon, in a gravel boat marina parking lot along the banks of the Niagara, Kevin VanDam held yet another victory trophy. The 23rd win of his unparalleled career. I did my necessary interviews with him, and began to walk toward Mom and Dad’s Toyota RAV4 for the trip back home to the ‘House That Built Me.’

That’s when VanDam spoke up.

“Momma Guck, we won another one – it might be the cookies,” said VanDam as he hugged her and she stood proudly between he and his wife, Sherry, who started baking cookies for Kevin to take to tournaments in 2003.

“Truthfully, it’s not what they’re made of – it’s the thought that counts – just knowing people like Momma Guck care enough to make them for me means the most,” said VanDam as he, his wife Sherry, and their twin teenage sons headed toward home—another winner’s trophy strapped-in, and the last remaining Ranger cookies from Momma Guck in a small plastic bag.