Capt. Mac Gregory knew the fish were down there, but bites were too few and far between for his liking.... 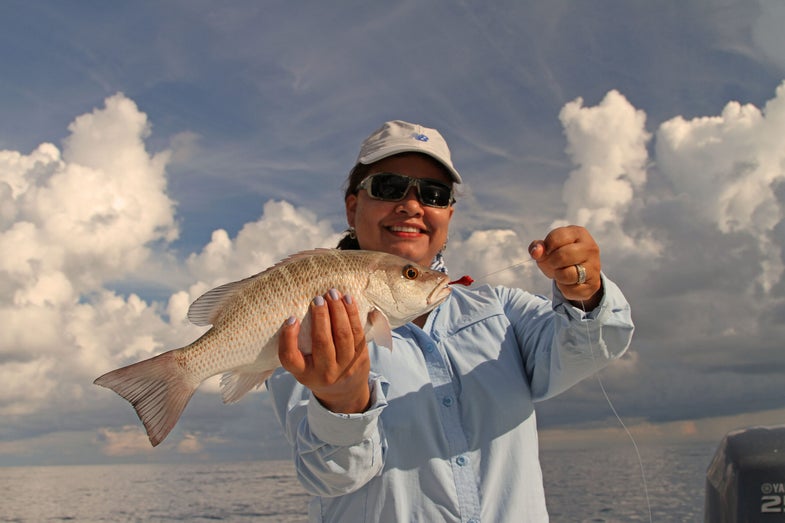 Capt. Mac Gregory knew the fish were down there, but bites were too few and far between for his liking. Stocked with a live well full of sardines, the Bradenton, Fla., captain had hosted my wife Mercedes and me for a morning of mangrove snapper fishing about 10 miles off Anna Maria Island.

Gregory commonly catches “mangos” on knocker rigs (slip sinker placed on leader right above the hook), but for whatever reason, the snapper were snubbing most of our drops. Curious, the captain rigged up a rod with just a 1-ounce jighead.

The advantages include a more streamlined package, less potential for bait spin, and less leverage for hooked fish to unbutton themselves. And, as Gregory notes, you can’t overlook the principle of diversity.

“Sometimes they just want something different,” he said.

Indeed, just as I’ve found with sheepshead in deeper water, the ability to present a natural bait without a lot of terminal tackle often gets otherwise persnickety fish to cooperate. On the strike, a hook and weight working together makes a highly effective snare.

Case in point: My wife, whose offshore experience is minimal, found the jighead helpful in sticking a sneaky snapper unassisted.

Mac and I had turned our attention to a barracuda that had been circling the boat when, from the far side of the boat we hear: “I got one!”

Turning toward my wife, I thought she was announcing a bite, but nope—she really had one. Holding the leader a few inches from the jig, she displayed a keeper snapper that she’d nabbed by herself.

Size your jigs according to depth, but go as light as you can get away with, while ensuring a quick fall that hits the target without drifting in the current.