Up the Missouri: The Start of a Fishing Road Trip

Around noon on Wednesday, May 16, 1804, a keelboat laid anchor on the north shore of the Missouri River at... 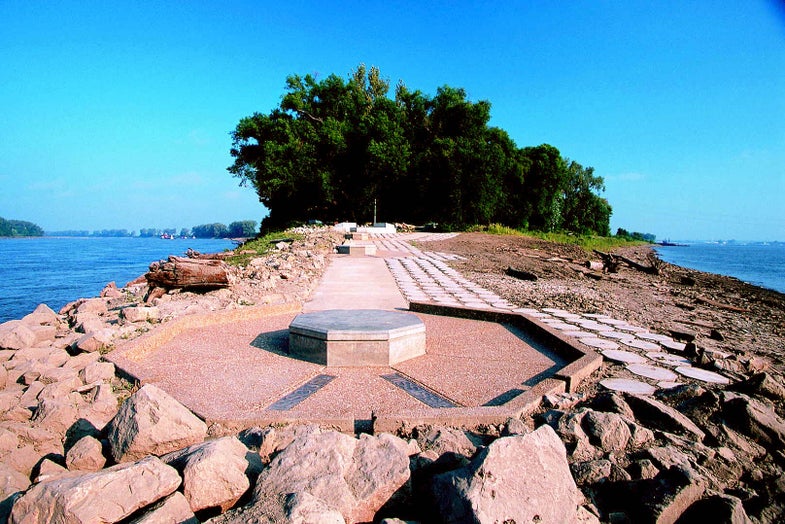 Around noon on Wednesday, May 16, 1804, a keelboat laid anchor on the north shore of the Missouri River at a spot about 25 miles upstream from the desolate, flood-prone junction where the Missouri joins the Mississippi River. The party’s commander surveyed the nondescript village that was scattered along a mile-long mudflat at the base of a low hill. He found the locals friendly and welcoming.

“We arrived at St. Charles at 12 o’clock a number Spectators French & Indians flocked to the bank to See the party,” Capt. William Clark recorded in his journal. “This Village Contns. about 100 houses, the most of them small and indefferent and about 450 inhabitents Chiefly French, those people appear Pore, polite & harmonious.” Clark and his men spent four days in St. Charles while waiting for his friend and co-commander, Meriwether Lewis to come from St. Louis. Lewis arrived on May 20 and the Corps of Discovery departed the next afternoon: “Under three Cheers from the gentlemen on the bank,” Clark noted.

A couple hundred years later, I landed in St. Charles, Mo., where the inhabitants had retained their polite and harmonious demeanor but appeared to be enjoying increased prosperity. However, they hadn’t forgotten the visitors from long ago. A 15-foot high statue of Meriwether Lewis, William Clark and Lewis’ dog, Seaman, overlooks the river front where Clark anchored the keelboat and by doing so, afforded the town a measure of fame it likely otherwise never would have achieved.

For an hour or so, rod in hand, I prowled the riverfront (now a groomed and well-manicured park) casting around the rocks, root wads and a wing dam that now buff the north bank, eventually landing a channel catfish. I’m not really a big river fisherman but for reasons hard to explain the Missouri has a special allure. It does for all of us, I suspect. Even Thomas Jefferson failed to resist its pull, although his interests were more commercial than sporting or historic or romantic. Before sending Meriwether Lewis on a daunting and dangerous journey that had every chance in ending in his and his party’s demise, the president’s instructions were clear: “The object of your mission is to explore the Missouri river, & such principal stream of it, as, by it’s course & communication with the waters of the Pacific Ocean, may offer the most direct & practicable water communication across this continent, for the purposes of commerce.”

That is not my mission. For the next few days I will be working my way up the Missouri on a solo road trip. Camping. Fishing. Watching. Listening. Learning.

The Missouri today is channelized and impounded, tamed and muted, but still powerful and dangerous. It is much different from the wild and river that Lewis and Clark faced. This will not be a retrace of the Corps of Discovery, although anyone prowling around the river can never really get away from these guys: Drouillard, Charbonneau, York, Bratton, Collins, Colter, Cruzatte, Fields (Joseph and Rueben), Sacajawea, Frazier, Gibson, Goodrich, Hall, Howard, Labiche, Lepage, McNeal, Potts, Shannon, Shields, Thompson, Werner, Wiser, Windsor, Whitehouse, Lewis and Clark.

But why would you want to? Their journals mention fish or fishing more than 600 times. Those are my kind of explorers.