Shark fishing in the Northeast can be a pretty sporty event, with top targets being high flying mako sharks that... 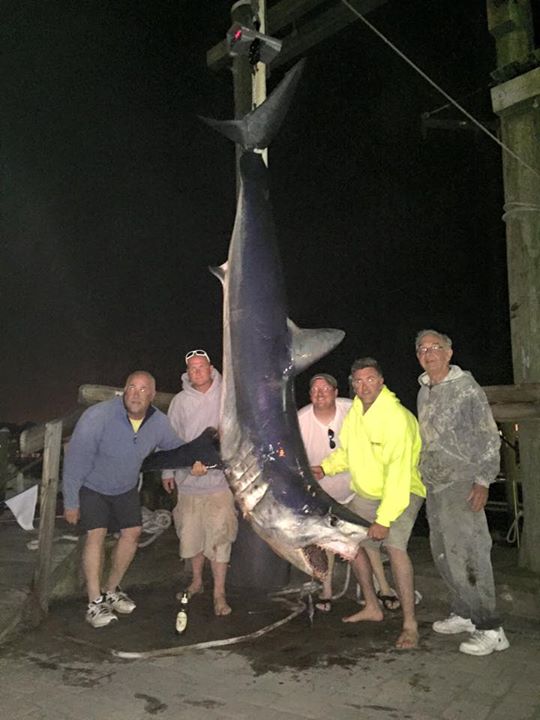 Shark fishing in the Northeast can be a pretty sporty event, with top targets being high flying mako sharks that average 150 to 350 pounds, long whiptailed thresher sharks that run 300 to 600 pounds, and an assortment of great white, blue, tiger, brown and dusky sharks that call the Northeast home. But every now and then, a monster rears its head. A 350-pound mako shark would easily win most tournaments, but Captain Fred Dirsh on the Missfit, fishing out of Cape May, New Jersey, would’ve stunned the weighmaster at weigh in. Angler Gary Blakla and the crew of the Missfit managed to land a massive 820-pound mako shark from inside the Jersey Canyon. Blakla got the fought the mako boatside in 70 minutes using 50 class standup tackle, and “the crew spent as long boating her as they did fighting her,” according to the South Jersey Marina Facebook Page.

How to Catch Sharks
Shark fishing is generally described as hours of boredom spliced with minutes of absolute mayhem, especially when mako fishing. A general sharking set up starts with looking for water in the 64- to 73-degree range, and bringing plenty of bunker or mackerel chum, ladled into the waters to get a chum slick going to attract sharks. Gear is heavy duty, mainly 50 to 80 class rod and reel set ups, spooled with 80-pound running line and 300-pound leader with wire leader and 12/0 to 14/0 shark hooks. Three lines are the basic set up in a 30/60/90 rule – a close line at 30 feet out 30 feet down, and two others at 60 feet and 90 feet. Whole mackerel, bluefish fillets, or logilo squid are usual baits for Northeast makos, sometimes, but not always adorned with rattles, flashy skirts or other attractants and sent back.

Once a mako shark is hooked, the entire crew is involved clearing lines and prepping to land or release the shark as makos entertain some insane, high flying aerial antics and blistering runs that will test the will and strength of any angler. Though shark populations have been in a steady decline, and most people do play catch and release with makos nowadays, there is no harm bringing a 150 to 200-pound shark back to the dock to cook up as succulent steaks.

The 820-pound mako was a once in a lifetime catch for sure. The current NJ record mako stands at 856 pounds, only 36 pounds more than the Missfits catch. According to South Jersey Marina page: “The crew wanted to catch a mako for the grill, but they nearly caught one for the record books.” That’s a fact.