On May 24, Justin Fisketjon of Sidney, Mont., brought in an 85-pound paddlefish from the Lower Yellowstone River. The Bowfishing... 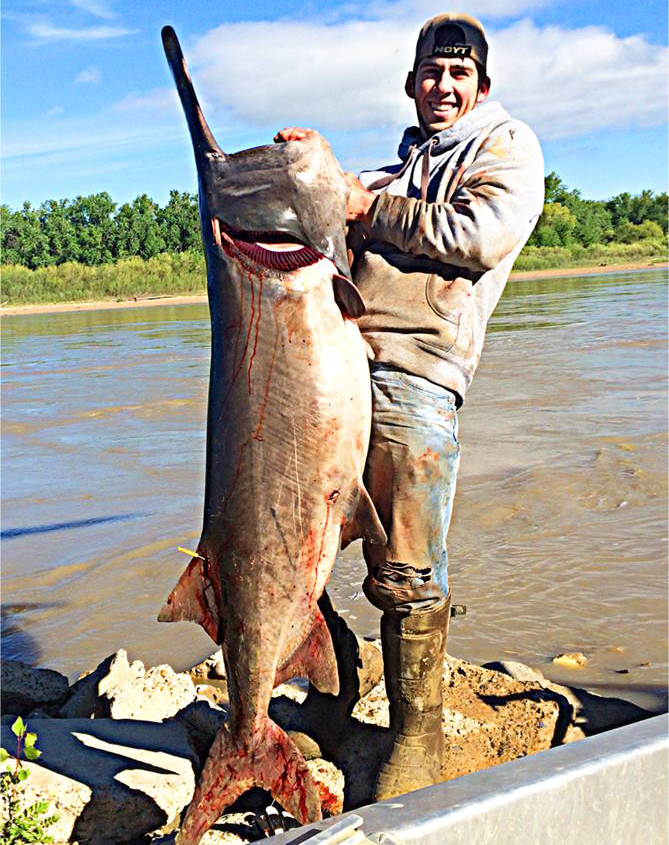 On May 24, Justin Fisketjon of Sidney, Mont., brought in an 85-pound paddlefish from the Lower Yellowstone River. The Bowfishing Association of America has certified his catch a world record, the largest paddlefish ever to be taken with bow and arrow.

Fisketjon was bowfishing with his friend Steve Harris Jr. when the paddlefish surfaced just long enough for him to draw and shoot. An avid bowhunter on and off the water, Fisketjon has taken paddlefish each of the last four years, but he knew right away this one was special.

“This one definitely fought harder than the rest of the paddlefish I’ve caught,” he told the Williston Herald. Perhaps that’s an understatement—he also admits that more than once the fish nearly pulled him into the water.

After a long fight against both the fish and the heavy current, Fisketjon and Harris brought the paddlefish to the shore, and measured its length at 69 inches. Thinking the fish could set a state record, they took it to be weighed on a certified scale at Triple T Meat in Glendive. Only when they saw its weight of 85 pounds did they realize they had landed the largest bow-caught paddlefish not only in the state, but in the world.

Fisketjon, rather than having the fish mounted, has sent its head and paddle to be professionally “beetled.” A special breed of insects will eat away the fish’s flesh, leaving behind only the stark skull and rostrum. Fisketjon has also sent photographs and the fish’s measurements to a company that will create a full replica.

That way, Fisketjon gets to have his fish and eat it too.

“From what I can tell, most people chunk it, batter it, and fry it,” he told the Williston Herald. “That’s probably the route I’m gonna go.”