Charles Patchen, a 13-year-old Alabama resident, was fishing the Chattahoochee River in Jackson County, Fla. when he hooked a record-breaking... 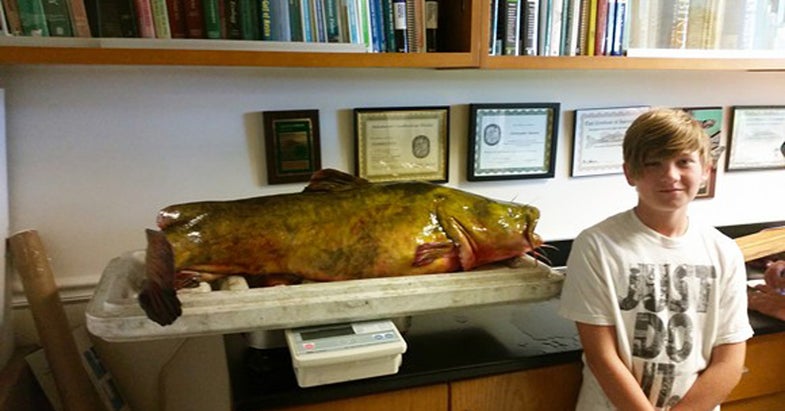 Charles Patchen, a 13-year-old Alabama resident, was fishing the Chattahoochee River in Jackson County, Fla. when he hooked a record-breaking 63.8-pound flathead catfish. His catch is quite the achievement considering he, according to the Florida Fish and Wildlife Conservation Commission, didn’t want to go fishing in the first place.

Patchen’s mother and stepfather, Jeanette and Bryan Atwell, had coaxed him into spending a morning in pursuit of panfish, but after a few hours of successful fishing, the bite stopped. Atwell guessed that a larger fish might have spooked the smaller ones, and he baited Patchen’s hook with a bluegill they had caught.

When the flathead struck Patchen’s bait, it was so heavy he thought he was snagged, and asked Atwell for help.

“I grabbed the pole from him, gave it a couple tugs, and the fish took off,” Atwell told the FWC.

He then handed the pole back to Patchen, who fought the fish for nearly two hours on 14-pound test and a Zebco 33 reel. When he finally brought it in, it was too large for the net, and had to be rolled into the boat.

“I was so tired after reeling it in that I fell back into the boat to rest,” Patchen told the FWC, “but I’m glad my mom made me go fishing that day because now I am the catfish master!”

His record supplants a 55.05-pound fish caught by James Auston Jr. in 2011 on the Yellow River.

Photograph via the Florida FWC