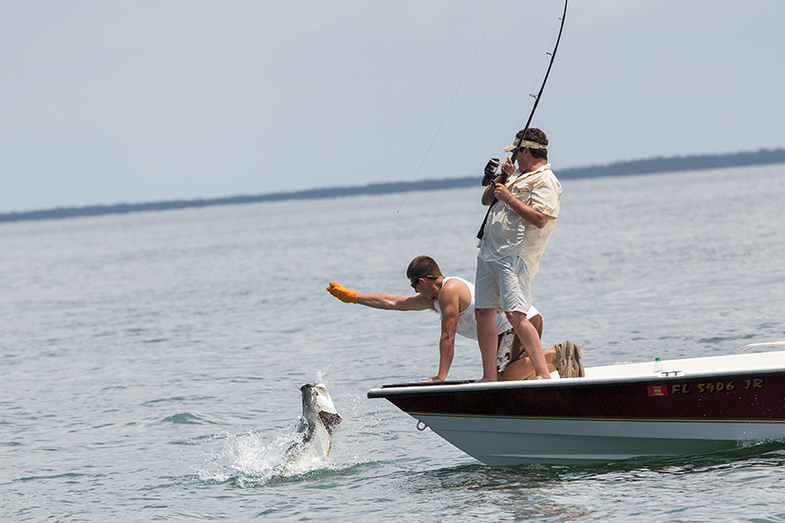 Triple-digit weights, stubborn dispositions, and acrobatic tendencies make tarpon perhaps the most iconic inshore gamefish that swims. Booking an experienced guide is one way for novice anglers to fulfill one of their greatest fishing dreams. But with the right tactics and tackle, it’s not difficult to target tarpon on your own in a small to midsize boat or even a kayak. And according to Captain Ron Harper, a seasoned lure expert from Apalachicola, Florida, the best way to catch the king is to plunk him with artificials.

“First, use the trolling motor to search for fish,” says Harper. “Focus on bays, passes, or pinchpoints like the mouths of coastal rivers where you find bait. Watch for rolling fish and those suspended or laid up just below the surface. You might also see pushes and wakes in the water that indicate movement or maybe just a fin tip. Tarpon fishing is a lot like deer hunting—you don’t always see the whole fish.”

When he spots fish, Harper gauges the current and leads fish by casting 10 to 15 feet ahead of their projected path. He then employs a slow, steady retrieve to swim the plug realistically. “Normally the fish will come up from behind or the side and slurp it in,” he adds.

Many first-­timers opt to use bait, but Harper believes he can catch just as many tarpon on lures. His favorites are soft-plastic DOA BaitBuster mullet imitations, followed by Bomber Long A plugs and MirrOlure suspending twitch baits. If the fish are in depths of 4 feet or less, he’ll switch to Slug-Gos or similar plastic flukes for stealthier presentations.

Harper matches his tackle with enough backbone to land fish pushing the 100-pound mark without wearing his clients out. He uses either a 7-foot 6-inch ­medium-​heavy fast-­action St. Croix Tidemaster spinning rod with a 5000 Shimano Stradic reel or a 12- to 25-pound-class Avid casting rod with a Curado 300 baitcasting reel. Both are loaded with 30-pound dark green or yellow Power Pro braided line. For a leader, he adds 4 feet of 30- to 40-pound-test monofilament followed by 18 inches of 60-pound bite leader (or fluorocarbon if the water is really clear), connected with Trilene knots. The lures are tied on with a non-slip mono loop knot.

Tarpon have very bony mouths, so set the hook hard several times after the strike. It’s important to maintain constant pressure and pull in the opposite direction to turn the fish’s head and keep it from gulping more rejuvenating air. When the fish goes airborne, point the tip toward the fish to add slack. This is appropriately known as bowing to the fish. After all, you are in the presence of royalty.

The Deadly DIY Half Dozen

1. Marathon, Florida Keys
The Scoop: Let a DOA TerrorEyz dangle in the current beneath the Seven Mile Bridge and hang on.

2. Apalachicola Bay, FL
The Scoop: Trophy tarpon migrate through this diverse estuary from May through October.

3. Grand Isle, LA
The Scoop: ****Down at the end of the bayou, CoonPop jigs are renowned tarpon takers.

4. Galveston, TX
The Scoop: The kings of Tarpon Alley, a 2-mile stretch of water just off the beachfront, are making a strong comeback.

5. St. Simons, GA
The Scoop: Cast a large twitch bait at early risers during the midsummer months along the coast.

6. Hilton Head, SC
The Scoop: Swimming mullet and pogy plugs are the Low Country secrets for the late summer and early autumn months.