Tips for Bass Bugging Without a Fly Rod, Part 2

As we mentioned in last week’s blog, even a brief afternoon outing with an angling legend like Bassmaster Elite Series... 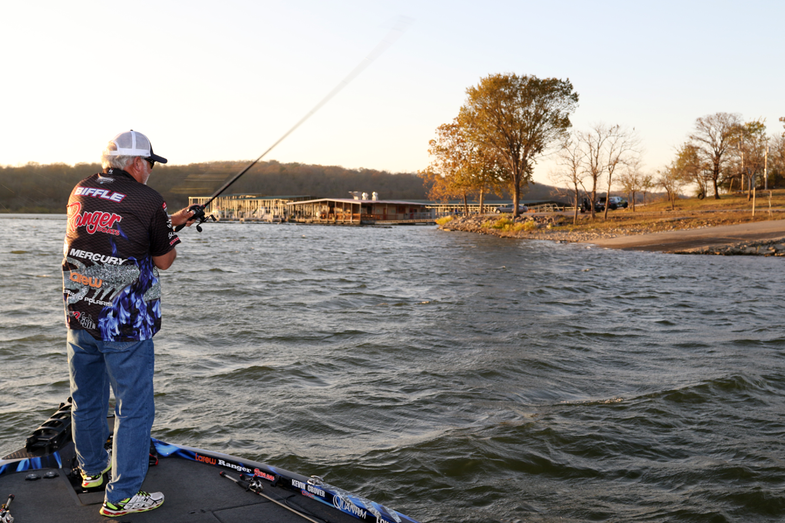 As we mentioned in last week’s blog, even a brief afternoon outing with an angling legend like Bassmaster Elite Series pro Tommy Biffle can yield a wealth of insightful wisdom.

Last time, we learned about Biffles strategy for using generous amounts of scent when fishing his Gene Larew Biffle Bug on a Larew Hard Head. This football-style head with a pivoting hook is made for rumbling over rocky bottom and Biffle shared a few pointers on where and how he does so.

Habitat Analysis
As we eased up to a long, flat shoreline on Lake Fort Gibson, Biffle noted that smallmouth tend to favor this kind of area. For starters, the bank took the full force of the main lake wind, so stacked baitfish would surely please the brownies.

Also, the “transitional bank” held a mix of chunk rock, smaller rocks and pea gravel—just the kind of neighborhood on which the fish will spawn each spring.

Biffle added this: “Those smallmouth like that pea gravel because they can pick off crawfish easier than they can around boulders where the crawfish can run into the cracks and crevices.”

Peppy Pace
As he worked his bait over the rocky bottom, Biffle made this observation: “I like a fast, steady retrieve best when I’m using the Hard Head because it keeps it out of the rocks. This head is designed to deflect off the rocks, so it’s not going to get down in those cracks like it can when you’re hopping it up and down.”

The Less Obvious
As we passed a small gravel point extending from the top end of a little crescent-shaped cove, Biffle pointed out that such spots often hold a big fish. The resident stud doesn’t always bite, but such prime real estate will always go to the biggest and most dominant fish, so work it well.

Just past that little point, our trip concluded at the city boat ramp — but Biffle didn’t immediately approach.

Boat ramps, he said, are one of the most overlooked sweet spots for a few reasons:

1. Regular prop surges from trailering boats leave distinct holes or trenches at the ramp’s drop-off. Bass love depth changes, so make a few casts — as long as no one’s launching.

2. Flat, cement bottoms, or even gravel ramps, collect heat and offer cozy warming stations during the chill of late fall through early spring. Later in the day, once these spots have had time to soak up the sun’s rays, fish will use them like heating blankets.

3. When tournaments release their fish, many set up shop not far from where they’re dumped. Cover these fish-holders a thoroughly and you may be surprised whose still hanging out there.