No doubt the dude in this video clip is having a blast, sitting on a stand-up paddleboard (SUP) and going... 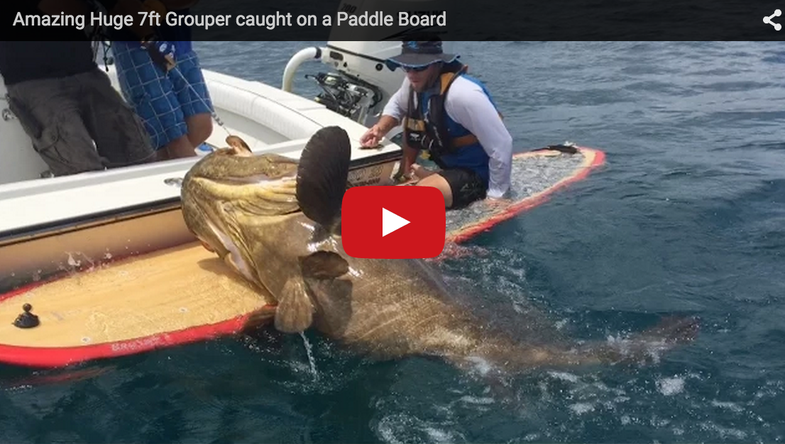 No doubt the dude in this video clip is having a blast, sitting on a stand-up paddleboard (SUP) and going mano a mano with a goliath grouper. This fish is a member of the largest of the grouper species, which can exceed weights of over 800 pounds.

Whether or not it’s been cleanly “landed from an SUP” is up for debate—the board seems to be tethered to the boat. Regardless, this is no small feat, and this guy put the boots to a monster fish while sitting on a floating board.

There are plenty of times during this battle where I wasn’t sure who was actually going to come out on top (see the 25-second mark—ha!).

So what if you want to catch yourself a goliath grouper? Since 1990 in the U.S., it’s been prohibited to keep goliath grouper because they’re still considered an endangered species. But stocks have rebounded to the point where regulations may be relaxed sometime in the near future. Goliath grouper hang around both inshore and offshore wrecks, but are closer than you think and can readily be found around back bay bridges, causeways and inlets.

Fishing for goliaths is obviously a full-contact sport—heavy stout tackle is non-negotiable. A standard jump-off point is to employ a stand up “broomstick” rod rated for 80 to 150-pound, matched with 50 to 80 class reel, and spooled with a minimum of 100-pound line and 300 to 400-pound class leader, crimped to a size 16/0 to 20/0 circle hook.

Baits include chunks of mackerel, jacks, bonito, or any large fish, or even a live jack, snapper, stingray, or whatever legal fish you may have on the boat. Goliaths will eat anything. The true battle with a goliath is winching him away upward while he digs down to bury himself in his rocky lair. If you head out targeting goliaths, bring plenty of aspirin—you’re going to need it.