The sharks in this video have definitely got my number. So far blacktip sharks have claimed three, count ‘em, three... 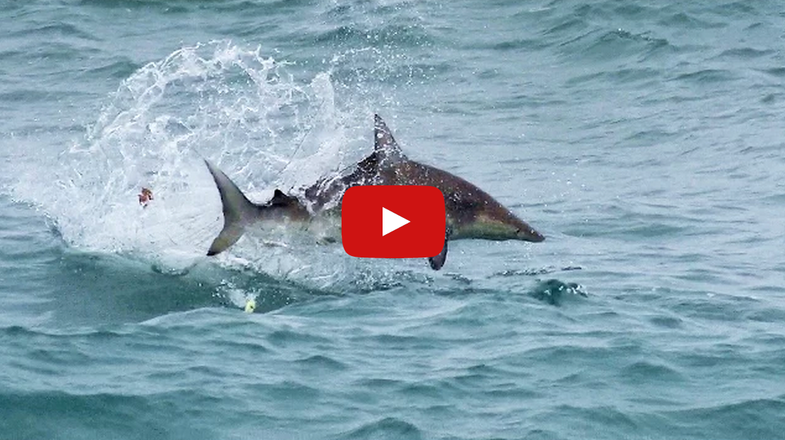 The sharks in this video have definitely got my number. So far blacktip sharks have claimed three, count ‘em, three $600 surf fishing setups of mine. They were abruptly stolen while I was sending out bluefish chunks as baits—I couldn’t get to the rods fast enough before they were pulled out of the sand spikes and launched into the surf.

I’ve since learned to set the drags a little lighter when surf sharking.

This video also proves that surf sharking isn’t just about chunk baiting: you can also convince sharks to strike artificial lures. What BlacktipH was able to capture on film exhibits exactly why these blacktip and spinner sharks are the ultimate predatory catch from shore.

These particular sharks were filmed in Florida (where I used to live and fish the sharky sands of Cape Canaveral Seashore) and scenes like this were not uncommon. Blacktips and spinners would vault out of the water on their migration off the Florida coast.

But what’s really cool about this video is how it showcases the sharks’ instinctual hits. Just like a diminutive largemouth bass, the frantic, topwater commotion of a popper ignites a feeding fury in a fish’s mind. It doesn’t matter whether it’s a 1-pound pond bass or a 300-pound mauler shark.

Topwater aggression strikes are probably the most exciting moments in anyone’s fishing experience, so if you find yourself in sharky waters, why not try it for yourself?

If you’re working the surf you’ll need some serious heavy duty tackle for this. I recommend a 12 to 14-foot surf rod, matched with a 20,000-class Shimano Stella reel or an Abu Garcia 6000 CTI, spooled with 65 to 80-pound braided line and a 130-pound monofilament shock leader tied with a massive wired-through 5-ounce popper such as a Yo-Zuri Sashimi Bull Popper.

If you’re on a boat and seeing sharks like browns, bulls, spinners, or blacktips blowing up on bait schools, you’ll want a stout 7-foot spinning rod rated for 50 to 80-pound class. Match it with a 10,000 class reel spooled with 65-pound braided line (with the same shock leader and popper mentioned above). This well help you get tight with a shark, and you’ll have the advantage of firing up the engines to chase the shark—so you won’t necessarily run out of line.

Work a popper in and around bait schools, or simply blindcast into the surf to see if sharks are patrolling. Once hooked up, you’ll be glad you filled the spool with enough line—because you’re going to be chasing that fish up and down the beach. Florida is always a prime spot to find sharks, especially February through April, but in the summer months, New Jersey, North Carolina, and Texas also become prime surf shark haunts.