What’s the Best Line for Summer Bass: Braid, Flouro, or Both? 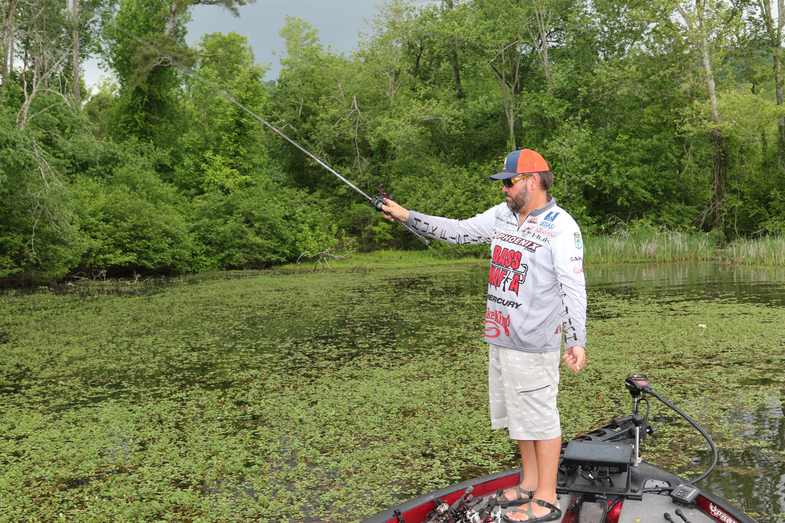 Summer bass fishing often means flipping or pitching Texas-rigged baits into shady cover for heat-averse fish. Suffice it to say, whatever you hook won’t want to come out, so you have to be properly equipped to wrestle a fish from its fortress.

A stout rod that loads quickly plays a key role, but so does line. Braid is often the assumption, as modern super lines, with their thin diameters and zero stretch, cut through entangling vegetation and provide maximum leverage for dislodging your fish.

The only downside is that most braided lines are glaringly obvious to wary fish that may refuse baits tied to the highly visible intruder. California rod maker and tournament pro Gary Dobyns solves this problem by topping his 40- to 50-pound braided mainline with a 16- to 20-pound fluorocarbon leader.

Fluoro is tough and abrasion-resistant, with the sensitivity to detect subtle bites. The biggest advantage is that it’s nearly invisible in the water.

In some cases, anglers may opt for flipping/pitching with straight fluoro. One example is woody cover where braid often pinches irretrievably into branches.

Elsewhere, when flipping legend Denny Brauer is fishing light to moderate cover with clear water and/or targeting heavily pressured fish, he’ll spool up with the Flippin’ Fluoro he designed for Seaguar.

The logic here is simple: You may be less likely to lose a tangled fish with braid, but you can’t catch what doesn’t bite. Fluorocarbon, Brauer says, can often deliver bites when the fish are spooking from braided mainline.