When a 90-Pound Teenager Catches a 60-Pound Muskie 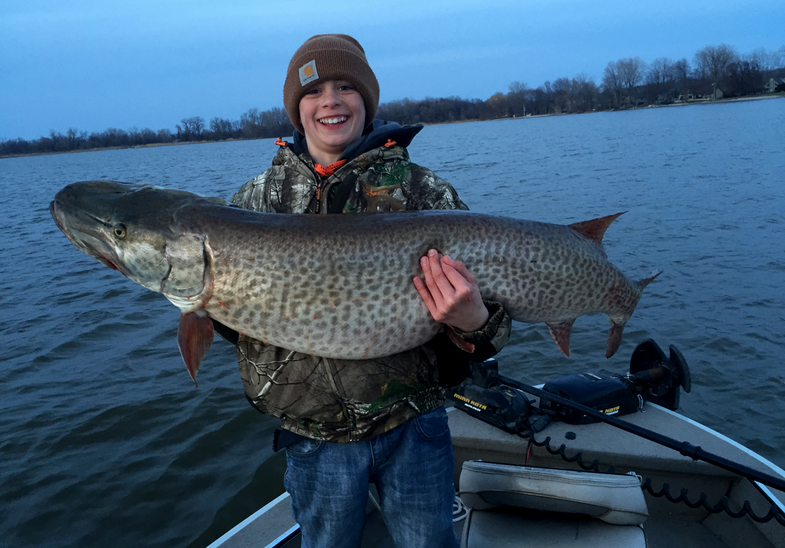 Muskellunge, “the fish of 10,000 casts,” is a challenge enough to catch, but landing a 60-pound muskie? That’s a lifetime experience, and even more amazing, 13-year-old Zach Kohlbeck accomplished that feat while fishing Green Bay with only a crankbait, a 6’ 6” medium spinning rod and 10-pound test line.

“When I hooked up, I thought it was a carp,” said Zach of the estimated 60-pounder, “But then when it surfaced the first time I saw it was way too long to be a carp.”

“I had to really work the drag. When the fish would make a run I would loosen the drag, when it stopped or slowed down I would tighten the drag back up and my dad pulled up the electric trolling motor. The fish pulled us around. When the fish would take off under the boat I needed to put the end of my pole under water to keep the line from rubbing on the bottom of the boat.”

When the muskie was finally boated, it taped out at 54.5 inches long with a 28-inch girth and was released within a minute.

“I think it was about 50 percent skill and 50 percent luck, as I’ve caught some big pike, largemouths, and walleye before,” said Zach. “But everyone else says I’m just really lucky.”

And for a final bit of irony, after releasing the beast, Zach returned home to finish a school report assignment he had been writing earlier in the day on—what else—muskies.