Why You Need a Fishing Tower

I’ll never forget the first time I covered a redfish tournament in Southeastern Louisiana. In the mid-‘90s, regional trails expanding... 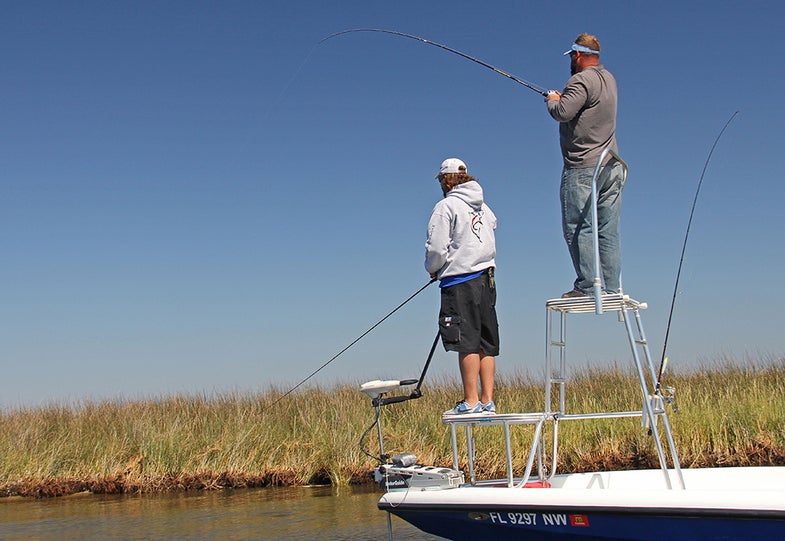 I’ll never forget the first time I covered a redfish tournament in Southeastern Louisiana. In the mid-‘90s, regional trails expanding to the Mississippi Delta brought with them a number of stealth strategies heretofore unnecessary in this region of massive fish populations, expansive habitat and relatively light fishing pressure—as compared to, say, Florida’s Tampa Bay, Titusville, or Charlotte Harbor, or Galveston Bay (Texas).

The most instantly noticeable difference between Louisiana boats and Florida boats were the latter’s elevated sight-fishing towers — aluminum frames built over the console or lighter step-ups positioned on the bow. Customizations are limitless, but the advantages were so clear that the second day of the tournament, local anglers showed up with folding step ladders that they’d use to improvise the same benefits to which their out-of-town competitors were accustomed.

• Target Acquisition: Spotting fish — full views, tailers or wakes — well before your encroach on their comfort zone increases your opportunity. A greater priority in highly-pressured clear-water fisheries where reds and other fish run from approaching boats, such advance notice also helps anglers in muddier fisheries where you might simply miss the fish from a deck-level view.

• Scope Out the Approach: Identifying the likely travel lanes and navigational considerations (i.e. cuts, troughs, bars, etc.) from a distance enables anglers to proactively plan their angles, rather than struggling to reach a sudden opportunity complicated by shallow water features.

(FYI: Fish craftily leverage every advantage nature provides, so don’t ever expect them to make it easy on you.)

• Long Casts: Straightforward as it gets; elevation allows you to send those baits farther. When fish are spooky, your best — if not, only — opportunity may come at the end of a lengthy heave.

Many boat makers offer towerboat models, while after-market marine fabricators can design and build a tower to fit just about any vessel.

In a pinch, that folding ladder deal works. You’ll catch some heat at the ramp, but catch ‘em how you want to catch ’em.