Bloat, it’s one of the scariest things a dog owner can face. I’ve heard several stories of guys walking out... 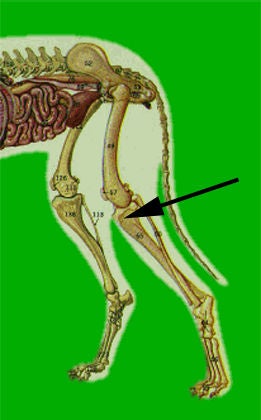 Bloat, it’s one of the scariest things a dog owner can face. I’ve heard several stories of guys walking out to the kennel in the morning to find their dog dead with a distended stomach.

Last night we came home after a late movie (Johnny Depp’s Public Enemies; IMHO it was just average) and while reading in bed our non-sporting dog, an English Bulldog, began driving me absolutely crazy. He was licking, or perhaps lapping, at nothing, almost like he had cottonmouth and was going to be sick. At first I took this as just his normal licking of forelegs or lip licking so after a couple of “shuddups!” and a “knock it off!” or two, I began to watch him and think about what he was doing.

He wasn’t licking his legs and he couldn’t sit still. He would lay down for a minute or two, then get up, pace around the room and lay down again only to get up and pace again. I had fed him just before we left for the movie and so it had been about three hours since he last ate. I got up and felt his stomach. It was hard as a rock and huge.

Now I’m thinking bloat. I watch him for a couple minutes and press on his stomach, as if that’s going to somehow magically reveal whether or not he actually is bloated or not, and then head to the computer to start looking up symptoms of bloat. I pretty much know them, but when actually faced with perhaps making a run to the ER clinic at 2 a.m. it’s reassuring to know you’re not overreacting.

Symptoms included restlessness (check), hard and disstended stomach (check), uncomfortable (check), unable to pass gas (check, which is very unusual for a bulldog!). So now I’m thinking about making a late-night run to the ER when I found an interesting link.

It probably wasn’t the time to start investigative reading, but I felt the dog was okay and although he was showing signs of bloat, he was also showing signs of having a bellyache (very common for a bully).

The link was about acupuncture pressure points and using one near the knee to help a dog pass gass and relieve bloating. Now this wouldn’t help a dog that actually had a twisted gut as the entrance and exit to the stomach are sealed off, but it could help relieve a dog with a bellyache.

After reading it I went in to the bedroom to find the bulldog resting much more comfortably next to the bed. His stomach wasn’t nearly as hard and it seemed that he was just suffering from a stomachache. But I wanted to try the pressure point anyway. I lifted him on to the bed and laying him next to me began rubbing what I thought was the point. Sure enough, he began passing gas. Now this could definitely have been coincidence, but it’s still interesting.

There’s a vet with certification in acupuncture here in Helena that I’m going to follow up with about this and I’ll let you know what I find. If you want to read the article, here’s the link:

Does anyone out there know anything about canine acupuncture and/or massage therapy?

If you’d have asked me about it a couple of years ago I would probably have said it’s a bunch of mojo-malarky, but I do know some very good trainers that have been learning about massage therapy and have heard good things about acupunture. I’m not completely convinced but find the whole topic very interesting. Does anyone have any experience with either technique?