Looks as though the President has his dog, or rather his girls got their promised and much-touted puppy recently. During... 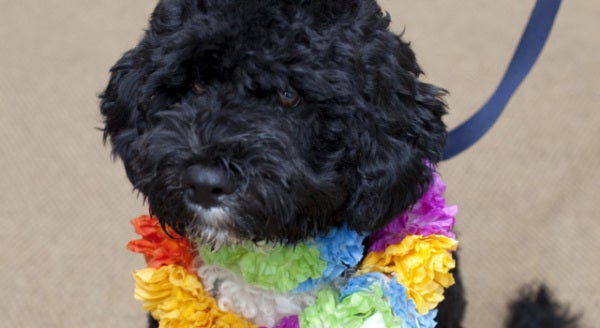 Looks as though the President has his dog, or rather his girls got their promised and much-touted puppy recently. During and after the Presidential race the topic of the First Dog was covered almost as much as health care (which leaves a lot to be said about the importance of health care during the race), with the decision to be made after the family settled into the White House.
Well, the verdict was made and it turns out the First Dog is a Portuguese water dog named Bo (it was a gift from Senator Edward Kennedy, himself a PWD enthusiast). Personally, I’m relieved. The decision was said to waiver between the water dog and the bastardized designer breed known as a Labradoodle.

The PWD shares much the same history as Labrador retrievers and Chesapeake Bay Retrievers. They were used extensively on fishing boats to retrieve nets, gear and to shuttle messages between ships. Like Chessies, they were also used to protect boats when docked in port. With curly or wavy waterproof fur, PWDs are athletic swimmers with a lot of energy (which should create some interesting photo ops over the next 4 to 8 years). Like many breeds, such as English bulldogs, PWDs nearly went extinct due to the influence of outside forces. While bulldogs were victims of society’s progression and the outlawing of bull-baiting in the 1880s, PWDs started disappearing in the early 20th century when technology took over the breed’s main duties. However, according to the AKC website, they were saved by Dr. Vasco Bensuade, a wealthy Portuguese shipping magnate and dog fancier, who helped keep the breed going.

So-called Labradoodles on the other hand are a recent manifestation of greed and ignorance. Touted as containing the best attributes of both the poodle and Labrador, the “breed” is said to hunt and contain the trainability of a Lab while having the hypoallergenic coat of a poodle.

The problem with crossbreeding is that traits are shuffled around and consistency is lost. Repeated line breeding and/or a diligent breeding among a small genetic pool is needed to promote any kind of consistency. As generation after generation is produced, some traits are strengthened while others are weakened. Depending upon the original Labrador stock used (show or hunting line), the hunting genetics in most (dare I say all?) Labradoodles is so watered down as to be useless (and that’s if hunting lines were used; there’s even less if a line’s origins trace to show dogs). I’m sure there are a few Labradoodles that can carry out some hunting needs, but to tout it as comparable to today’s hunting lines of Labradors is not only ridiculous, but perhaps even fraudulent.

Obama’s decision to go with the PWD isn’t just a boon for sportsmen, it’s good for the public in general. You can shell out the same amount of money ($1,000 to $3,000) for a purebred PWD or crossbred Labradoodle. You can buy a purebred Lab from established hunting lines for anywhere from $400-$1,500. Why is it a boon? Because there’s enough misinformation out there concerning recent designer breeds that if the President had selected one as “The First Dog” he would have been legitimizing that information and the promulgation of the designer breeds in general.

Now, don’t get me wrong. There’s nothing wrong with crossbred dogs. They’re healthier than most purebreds due, obviously, to the crossing. The problem is in marketing them as possessing the most desirable traits of both breeds without the associated downsides and in charging the same price as purebred dog with a definitive pedigree that helps, if not insure at least, better the odds that what you’re paying for is consistent and possesses the traits you desire. I’m sure there is a dedicated group of breeders out there working toward purebred classification of Labradoodles, and that’s fine…more power to them. But as they have to work within a small genetic pool and line- and in-breed, they too will experience more genetic maladies.

Long-story short: until the AKC or UKC sanctions the Labradoodle as a standalone breed, it’s still just a mutt…no matter how much somebody will pay for it.

Which leads me to another point: Obama has certainly played the political game perfectly to date, but selecting a purebred dog might be one mistake, at least to some extremists, that he can’t double-talk his way out of.

You see, Obama, at some point on the trail when the discussion of the girls’ puppy came up (you know, instead of health care), said that they’d prefer to get a pound puppy. The fact that he eventually went with a purebred from breeder has ticked some folks off.

The President’s answer? To make a donation to the Washington D.C. Humane Society (last graph in the story). If true, Mr. Obama, as hard as it is for many of us to accept, has done sportsmen another good deed. He donated the money to the LOCAL humane shelter and not the Humane Society of the United States.

Local humane societies have no ties to HSUS and receive no funding from the country’s (world’s?) largest and most powerful anti-hunting organization. The HSUS thrives on the misguided goodness of individuals who donate to their organization thinking that they’re helping shelter dogs. And every time a politician, movie star or musician donates time, money or makes appearances on their behalf, that idea is reinforced in the publics mind. By giving his donation to the local shelter, Obama not only helped shelter animals, he kept HSUS from garnering any undeserved credit.