Is Your Dog Smarter Than Your Toddler?

Apparently, my soon-to-be 3-year-old son isn’t as smart as my Labrador (though he might be smarter than our bulldog). So... 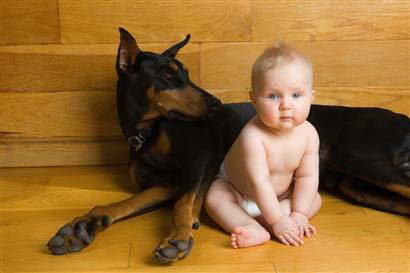 Apparently, my soon-to-be 3-year-old son isn’t as smart as my Labrador (though he might be smarter than our bulldog). So says a study by author and dog behaviorist Stanley Coren. And, for the most part, I’d agree with him. The comparison equating children and canine intelligence, however, is a slippery slope that leads into the hands of animal rights activists.

Coren’s study modified language and math tests originally designed to measure skills in children. The tests revealed that the average dog can learn 165 words (on par with a 2-year-old child) and that the smartest dogs can learn up to 250 words (including signals and gestures). In arithmetic tests, however, dogs have even greater smarts and scored higher than 3- and 4-year-old children. And as for canine social skills? They’re on par with human teenagers–no surprise for anyone that has tried to maintain an Alpha position with a dog.

I can’t postulate to the testing procedures and data collection, as I’m sure behaviorists, scientists and ethologists could debate the merits on a level way over my head, but according to the results the smartest dogs are:

Ranking at the bottom of the list are hounds such as the bassett and Afghan, as well as the beagle, basenji and my beloved bulldog.

Coren notes that the age of a breed and perhaps its job seems to have a factor into how well it did on this IQ test. “It’s important to note that these breeds which don’t do as well tend to be considerably older breeds. They were developed when the task of a hound was to find something by smell or sight.” (I was kind of under the impression that the task of many hounds was to find things by smell and sight still…???). “The dogs that are the brightest dogs in terms of school-learning ability tend to be the dogs that are much more recently developed,” said Coren.

The article goes on to say that these dogs might rank higher on instinctual intelligence tests; or those that measure how well a dog performs a job it was bred for (I’d disagree with him in the case of the bulldog; they were the pitbulls of their day and bred to fight. After the outlawing of bullbaiting in the 1800s, the breed nearly went extinct (as Coren explains in one of his books that I’ve read), but was saved by a small group of admirers that bred most of the fight out and accentuated the physical characteristics of the dog: big heads, deep wrinkles, etc).

I’m not really surprised by the dogs in the top seven, with one exception. They’re all working dogs that must have an interdependent relationship with human handlers to carry out a task. As impressive as retrievers are when working, it’s nothing compared to a border collie herding. (Something I’d love to learn more about). I guess the only small surprise for me was the poodle. Yes, they were developed as working dogs, sharing much the same history as the Lab, retrieving fishing nets and as hunting dogs, but the breed has become such a fancy (as in show ring) dog that it seems they’ve become nothing but a fun companion. It would be interesting to see how the poodle ranked in an instinctual intelligence test. Could say a lot about the direction of our breeding choices in terms of human-based competition vs original breed development.

While studies like these are fun to read and shed some light into the canine mind, I shudder every time I see a scientist (or perhaps journalist or editor perverting their words) compare animal intelligence to human intelligence. That’s a tactic animal-rights activists have used for years and will continue to use. By equating animals to toddlers/people, AR folks can get that emotional hook into ignorant readers and can spread their ideology on a level that non-partisan but impressionable people can understand. And those impressionable, ignorant people are the voters that will pass AR-inspired bills into law.

A recent study by respected animal behaviorist and author Stanley Coren has found that dogs possess the same intelligence as toddlers. Yet, our canine friends, which bring us so much happiness, are continually abused by their human owners. They’re beaten and electrocuted by men forcing them to comply with complex commands a two-year-old child couldn’t understand, and all for the sake of raping our forests and prairies of wildlife. Hunters do these barbaric thing to their dogs so they can kill other animals. The dogs that love them so much they continue to work for them even after being beaten by crops and shocked by electric collars deserve better. Please stop the barbarism and save a dog. You wouldn’t stand by and let a toddler suffer the same fate, why let an innocent dog suffer? Vote to outlaw electronic shock collars on November 2.

My example might be a little extreme, but so are the people trying to stop hunting. They will stop at nothing to end all hunting (and some even want to stop pet ownership) and use emotion to win sympathy and pervert science to confuse/misinform people. It will be interesting to see if any of the AR groups jump on this study in such a way.