Great trainers don’t just run drills or take their dogs into a field and let them chase birds. Great trainers... 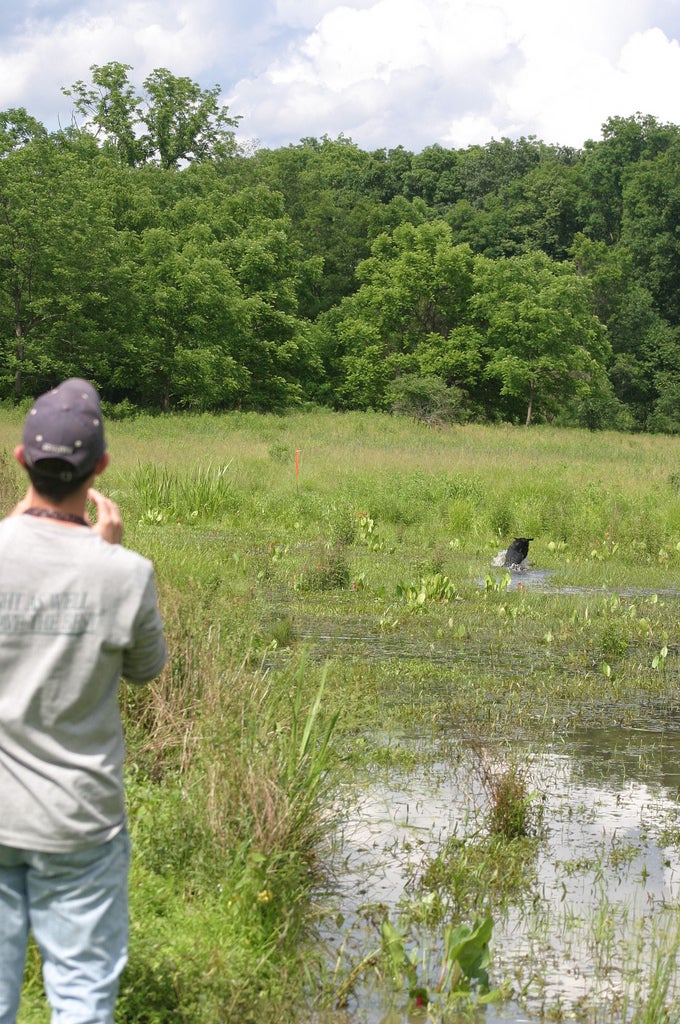 Great trainers don’t just run drills or take their dogs into a field and let them chase birds. Great trainers start each session with a goal and specific task to accomplish. They set up drills and scenarios that help teach the dog bits and pieces of a larger concept. By micro-focusing on areas that might prove problematic to the dog, they can anticipate trouble and administer well-timed corrections, praise or avoid the issue altogether.

If you’re not anticipating how your dog is going to behave to a situation, you’re not really training; you’re just reacting. If your dog makes a mistake because you didn’t anticipate the problem, you’re effectively teaching him to do it wrong. To train after reaching that point requires that you correct the dog to teach him that’s not what you wanted.

Sometimes negative reinforcement is the way to go and what is required, but to wholly rely on it is not only lazy, it’s unfair to your dog.

If your dog begins a drill at 0 and then does something right, you praise him and he moves up to say +2 (depending upon what praise you administered and how that particular dog reacts to that type of reinforcement). Let’s say he does something wrong and you correct him to -2 (again depending upon the correction and how the individual dog reacts to it). That dog has moved four places on the scale. If you used just positive or only negative reinforcement in your training, then the most that dog would have moved is two spaces. By using an equal balance of positive and negative reinforcement, you make each correction or praise that much more important to the dog. It also allows you to use less pressure or praise to reward/punish the dog; saving greater encouragement or discouragement for more complex/demanding scenarios.

Using a reinforcer (positive or negative) requires good timing to be meaningful to the dog. Hickox has a pretty cool system that allows that timing to be stretched out, effectively creating a larger window of time for you to reinforce the dog’s behavior. I’ll talk about that in another blog because, to be honest, I want to reconvene with him to make sure I get it right. However, traditionally speaking, you have to administer that reinforcer in 1-3 seconds for the dog to comprehend what you’re correcting or praising him for.

If you’re just running drills or turning your dog loose and aren’t tuned in to their behavior to the point that you can anticipate what they’re going to do, before they do it, you’re going to have a hard time discouraging or encouraging their behaviors (which is what training is all about). It goes further than just singular actions or behaviors (such as correcting a retriever for running the bank or a bird dog for bumping quail), anticipating what a dog’s next move allows you to train more effectively and keep from compounding the problem.

While not a perfect example, if you look at the picture above, you’ll see Kona pushing through the water headed for the bank. He’s right of the blind (which is indicated by the orange stake on the bank to his left; it might be easier to see if you enlarge the photo). I’m about to give him sit whistle and left-back cast. I could wait until he hit the bank to do it or wait to see what he’d do when he did hit the bank. The problem, besides losing control, is that those weeds are pretty high and if he gets into them before I hit the whistle and he reacted, he could be deep into them and when he did sit, he wouldn’t be able to see me. A come-in whistle would bring him out, but who knows what could happen between that sit and the come-in (especially if he were a young dog); maybe he gets distracted, maybe he winds the blind, maybe he finds another bird or any other number of possibilities. At that point I’d be losing control of the situation and hacking my way through it; teaching him who-knows-what.

A much better course, in my example and any other training session, is to anticipate trouble and know how to deal with it. You can do that with positive or negative reinforcement, attrition or by avoiding the issue altogether (which is usually your best bet, but not always).