Putting a microchip under your pet’s skin offers the best, most reliable, tamper-proof means of positively identifying your pet and... 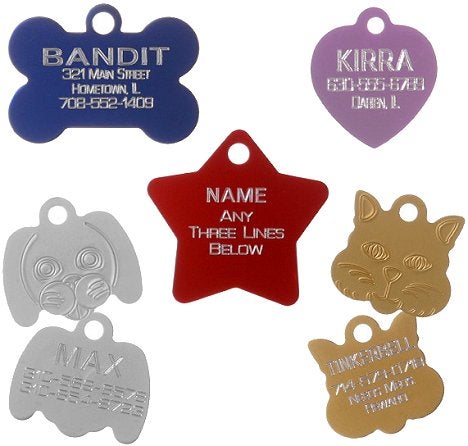 Putting a microchip under your pet’s skin offers the best, most reliable, tamper-proof means of positively identifying your pet and allowing a shelter, vet or even some breeders to return them to you. Old-fashioned identification “dog tags”, however, are the easiest, cheapest and quickest way for a kind stranger to return them.

I have to admit, Kona, our Lab, and Hoss, our English bulldog, are both microchipped but neither wears tags on his collar. In fact, Kona rarely wears a collar. It’s something I always think of when buying dog food and I see the little dog-tag kiosks, but something I never seem to follow-up on.

That’s going to change very soon as I read a tale of a lost Lab that was sent to me from outdoor writer MD Johnson. If you read any outdoor mags, you’ll recognize MD’s byline. He’s prolific writer and an outdoorsman to the core, and his little tale rings true.

Julie and I live in a little Iowa town of about 150, where everyone knows everyone. The gal who owns the General Store called Tuesday afternoon to say that some neighbor girls had one of our black labs. “They got off the bus,” she said, “and there he was.” Fortunately, both of ours – Jet, 12, and Deacon, 7 – were lying in the middle of the living room. Still, the girls bring the big male – black, black collar, maybe two years old – by and I take a look; don’t recognize him. They’re going to take him around town and ask –

Few minutes later, a neighbor boy and fellow hunter, Tannor Peska, 15, shows up with the lab in the back of his truck. “What do we do?” he asks. So we take the pup on a drive, searching the surrounding area for folks we know have labs – no dice, as – fortunately – everyone has their dogs at home.

I call Miss Karen Arians of KC Kennels just south of town here a couple miles. She and her husband breed and train labs; I figure she might have heard something, but she hadn’t. “I can put him up for a couple days until you hear something,” she tells me. So I put him in the back of the truck – NOTE: He’s very well-behaved – and take him to Miss Karen. I assumed she’d keep him outside, but NO – after some quick acclimation to her other pets – a female lab, lab pup, Lhaso Apso, cat, and kitten – the lost male gets to stay in the house! These are awesome folks, and really know what they’re doing with dogs.

Once home, I call Brian Darrow, our vet, and let his people know that we have the dog should someone call or come looking. Wednesday morning, Karen calls – “The owner came and got the lab!” she says. She tells me she had called the Linn County (Cedar Rapids) Animal Shelter that morning. They, in turn, told her that a man had called to tell them of the missing dog. Miss Karen gets the man’s name and number, calls him, and there you go – lost lab and owner reunited! Fellow said the male had wandered away on Saturday from a small town nearby – probably eight miles as the crow flies from where he was found, and had to cross one major four-lane highway and a busy two-lane. Beautiful dog, great help from the community, and a very happy ending.

You know us, Brian. Julie and I have black labs. And no matter how diligent you are, the unpleasant can happen where they wander away, get scared and bolt, etc. I watch mine like the proverbial hawk, but had our male get a snoot-full of female-in-heat a couple Christmases ago and head east. Found him – by luck – a mile out of town in a fellow’s yard. Our older one, Maggie, passed away on 5 May 2008 – she would just wander as, we think, her mind was slipping…like mine does daily.

Microchips are good things, yes; however, if this lab had had identification on his collar – NOTE: He had a quality collar, but no ID – it would have made contacting his owner very simple and much quicker. ID tags are inexpensive, but the very best insurance you can have should your hunter wander off.

So my question to you Gun Doggers: Do you microchip, use ID tags, tattoos or some other form of identification on your pooches? Or do you double-up and use chips and ID tags?