Because we all love a happy ending, here’s a story from Greenville, S.C., about a Labrador retriever-mix-breed puppy that was... 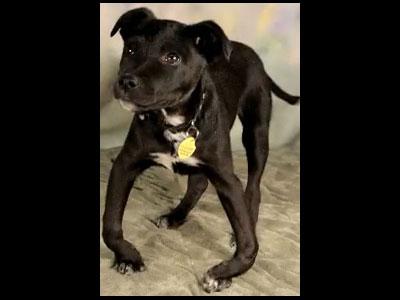 Because we all love a happy ending, here’s a story from Greenville, S.C., about a Labrador retriever-mix-breed puppy that was adopted from the local humane society shelter only to be returned a few weeks later with deformed legs.

Apparently, the pup had undergone a freak growth spurt and its leg bones had out-distanced its muscles, causing the pup to walk on the sides of its feet and expend massive amounts of energy-to the point of collapsing.

According to the local news station, WYFF4.com, a local vet donated her time and a grant helped pay for the other expenses. The pup, nicknamed “Bambi” by shelter workers, then faced the problem of being adopted again. After two weeks, Melissa Henderson, who felt a connection to the pup after having lost her leg in a motorcycle accident, came into the humane society and took Bambi home. The puppy with crooked legs is now in training to become a therapy dog for a local hospice.

Click here to check out the entire video newscast and more photos of Bambi.

The newscast doesn’t say what caused Bambi’s “freak growth spurt” but so often nutrition and feeding habits are a cause of improper growth. Too much of one ingredient or another can cause puppies’ bones, especially in large breeds, to grow too fast. Feeding a quality food, and feeding it properly, as well as exercising your puppy and playing with it (again, properly) can keep bone development normal.

For more on properly feeding puppies, check out this great article from Purina Pro Plan’s website.