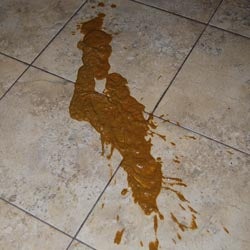 It was 4:30 a.m. and Kona was whining. “Shut up,” I said and rolled over in bed. It continued even as he moved into the living room. After a few minutes I got up to see what was going on.

I found my black Lab sitting alertly next to a pile of liquid poo deposited on my apartment’s carpet. Kona looked at me as if to say “this is what’s wrong, you moron!” I quickly took him outside where he blew contents from his backend all over the communal compound. After painting small grass patches with poo (and cleaning it up as best as possible), I went back inside to address the mess on the carpet and return to my bed.

Little did I know that when I’d get up a couple of hours later, my good-morning greeting would include several more crap-splatterings pasted across the carpet (none on the linoleum, mind you). What became scary is that as Kona’s episode of diarrhea continued, the contents of his deposits moved from liquid stool matter to spraying blood.

After waking to find multiple piles of poo painting the apartment floor, I gave Kona two Imodium/loperamide tablets and began cleaning up the mess. While sopping up the liquid bowel movements, Kona blew out again. If that wasn’t enough, my toddler son, Tucker, decided to join in on the action and peed on the couch. He didn’t have a good reason other than a giggling “Nooo pee-pee in potty!”

After that Kona was banished to the apartment balcony. I should have thought ahead and placed potty-training pads down, but I didn’t and after returning home a couple of hours later found that Kona’s troubled GI track had sprayed the area many times. Do you know how hard it is to clean a second-story balcony of diarrhea without completely incurring the wrath of those living below you? I’ll tell you: very, very difficult!

By the next morning Kona’s diarrhea had moved from containing traces of blood to full-blown bloody expulsions. Despite more Immodium, the stools weren’t firming up at all, so I took him into the vet.

Acute diarrhea is more than just messy, it’s dangerous and can indicate anything from an upset stomach to a swallowed object causing stomach/intestinal damage to parasites to bacterial infections to an indicator of liver and kidney issues. In addition to the primary disorder causing the GI track troubles, diarrhea can quickly dehydrate a dog.

If your pup has diarrhea and it doesn’t stop, or at least start to firm up, and/or contains blood, after 24 to 48 hours (depending on severity; I took Kona in at about the 30-hour mark) you need to take him in to the vet (if you’re in doubt, err on the side of caution and make the trip).

You can try to give them Imodium but, as the vet pointed out to me, not all dogs respond to the medication (and I’m now pretty sure Kona is one of these animals because during his only other episode of acute diarrhea, after a week of hard training and travel, he didn’t respond to over-the-counter Imodium nor oral or injectable forms from the vet).

Because Kona is in his prime, showed no signs of dehydration or loss of apetite and wasn’t lethargic, we didn’t run any tests on him and opted instead to go with 500mg of Metronidazole (AKA: flagyl)— a broad-spectrum antibiotic that would address dietary issues, such as eating something from the garbage or out in the field (one of the most common reasons for acute diarrhea, according to the vet), as well as bacterial infections such as Giardia (which for a Lab is quite possible as any water is prime swimming water, regardless of depth or freshness…and Kona did flush a pair of resident ducks from runoff water behind the apartment complex).

I’m happy to report that after 24 hours Kona’s stools began to take shape again and are now looking poo-tastic. It’s a relief after seeing how uncomfortable he was and how scary it is after he began to expell copius amounts of blood.

THOUGHTS ON POOP CLEAN UP

Paying for a visit to the vet’s office is one thing, but man, trying to clean up the mess made on the carpet is another. I spent as much, if not more, on cleaning product than I did at the vet’s.

I usually take the “dump everything on it” approach. It was no different this time. In one combination or another I used: warm, soapy water; Resolve Multi-Fabric Upholstery Cleaner; Nature’s Miracle Advanced Stain and Odor Remover; Woolite Pet+Oxygen Stain & Odor Remover; Woolite Heavy Traffic Carpet, Rug and Upholstery Cleaner; and some unidentified liquid my mom gave me.

What are the best products you’ve found to clean up after poopy puppies?