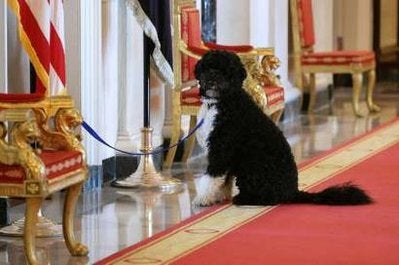 According to this Yahoo! News story, President Obama’s dog, Bo, is worth $1,600. The figure comes from the President’s 2009 Financial Disclosure forms. On it, the First Dog’s value is listed as a gift from the late Sen. Edward Kennedy.

For some the value of a dog is immeasurable. For others it’s simple arithmetic. For some, they place a value on a dog by the initial investment that they put out. For others that initial value is just the beginning and lump-sum worth is compounded by vet bills, feed, campaigning costs and potential stud fees or breeding income. Start getting sentimental about memories captured while with your dog and its value hits that immeasurable level.

But $1,600 for a pooch whose biggest achievement will be to not poop on the White House carpet? What do you think Gun Doggers?

I for one won’t, in most cases anyway, cast stones at the price someone pays for their dog. It’s up to you, your financial standing, the care and time you can invest in the animal and many other factors. I might not understand shelling out four- or five-figure price tags for ankle-biting, yappy mutts that amount to not much more than a Gucci purse, but, hey, that’s your choice.

Plus, I’ve paid quite a bit for Kona, our black Lab, and Hoss, our English bulldog, in up-front costs, as well as time, vet bills, travel and costs associated with training/testing and more.

As for the President’s dog, I don’t think $1,600 is probably far off. It undoubtedly comes from great lines and probably has a stacked ancestry from the show ring. Doesn’t seem out of line really.

What the hell happened to transparency and accountability? Why isn’t the IRS knocking on 1600 Pennsylvania Avenue’s front door with an audit? I wonder how many of us on “Main Street” could get away with an $8 MILLION variant in reported income and a $5 MILLION variant in assets?

I don’t know. Maybe I just don’t get it. I’m just a writer that enjoys dogs, maybe I’m not smart enough to understand why the government needs to know every single thing about my finances but the man that campaigned on the promise of going through wasteful government “line by line” can get away with an $8 MILLION dollar differential in his reported finances.