It’s been a busy canine-news week. First we reported on rock stars, a canine census and Hells Angels, now the... 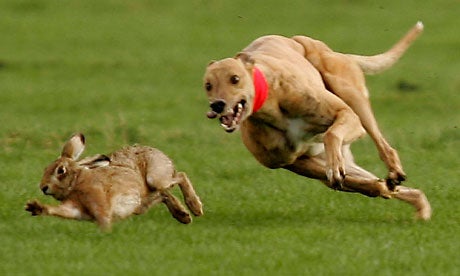 It’s been a busy canine-news week. First we reported on rock stars, a canine census and Hells Angels, now the plethora of doggie news continues with a story about the end of hare coursing in the UK, a pet-waste cleanup man that returned $58 found in dog poop, a man that was run over by his own pooch and Chinese dying their dogs to look like wildlife.

While the latter two stories are amusing, the news from Northern Ireland about the end of coursing continues a dangerous trend against sportsmen in that country. And the ramifications of decisions made across the Atlantic will eventually be felt on our shores.

Northern Ireland Bans Hare Coursing: According to the Guardian newspaper, after a seven-hour debate Northern Ireland lawmakers voted 23-18 to ban hare coursing. The ban was, of course, lauded by animal rights groups.

In the UK coursing involves capturing wild hares and then releasing them in an enclosed area. Greyhounds are then released to chase it down and kill it. Whether or not you agree with the idea, the move highlights the struggles of urban vs. rural lifestyles.

A voting public, the majority of which is found in urban areas, that is out of touch with rural traditions, including coursing and fox hunting, has the power to ban these sports. Both sports have already been banned in the rest of the UK, and there’s a bill being considered that would end fox hunting in Northern Ireland, as well.

While England and Northern Ireland might be a long way from the U.S., what happens there has an impact here. The animal rights movement started in Europe and is ahead of us as far as political impact and footholds. What happens there will be tried here. It’s not such a jump to point out that a dog chasing a hare and killing it is as barbaric as a pack of hounds treeing a cougar or bear only for a hunter to take pot-shot at it. In fact, using hounds for both cats and bears is already illegal in many states and initiatives to ban it in other states are continually popping up. From there it’s not too much of a jump for AR activists to apply the same logic to upland birds and waterfowl.

Fame Finds Worker Who Found $58 in Dog Poop: In case you missed this little diddy of doo-doo: Steve Wilson of Belleville, Ill., found $58 in piles of poop and returned it the rightful heir. The laidoff IT worker took a job as a profession pooper-scooper and after finding the money, washed it and returned it to the owner. His honesty and humorous story is making viral rounds and he’s doing radio interviews and there’s even talk of television appearances.

My dogs have eaten lots of stuff. As regular readers of this blog will know, Kona’s escapades led to acute diarrhea (I believe it was caused by wolfing down bones from deer and rabbit skeletons in the field we walk through daily) and Hoss, the bulldog, has eaten just about everything, including: aluminum foil, paper towels and several items I can’t (and don’t want to) talk about publicly.

How many Gun Doggers have had their pooch literally eat the money from their wallets? What about some of the other items? Socks? Shoes? Garbage?

Dog Runs Over Owner: This isn’t the first time I’ve heard of a dog popping a car into gear and running over their owner, but that’s probably doesn’t matter to Florida’s Christopher Bishop.

Apparently, Bishop was checking his Ford F-150 for oil leaks and left it running in neutral with the door open. His bulldog then jumped into the cab of the truck and knocked it into gear. The truck rolled forward and over the left side of Bishop’s body. He was able to get up, stop the truck from rolling into his neighbors fence and then went into his single-wide mobile home. Several hours of intense pain forced him to go seek medical attention. He was admitted for non-life threatening injuries.

Like I said, it’s not the first time I’ve head of this happening and it’s not the worst thing in the world. It seems like every year there are stories of hunters killed by their dogs. It usually happens because the guns aren’t safely secured or on safety while in a blind or boat and the dogs are out of control and knock the gun over or step on the trigger and inadvertently shoot their owners.

And finally, for the really crazy news…

Chinese Dye Dogs to Look Like Wild Animals: I don’t know. I might just be too much of a red-blooded American (some might say redneck), but I don’t get Europeans (see the outlawing of dog sports above) and Chinese.

When the Chinese do something, however, anything, they really DO IT! And they take it to extremes! Take for instance the earlier blog post on the $600,000 dog. Now take a look at some of these images of Chinese dog owners that are dying their dogs’ hair to look like tigers, pandas and other wildlife. All I can say is: