I’ve been in a cyberspace abyss for most of the last three weeks. With only flashes of internet connection, my... 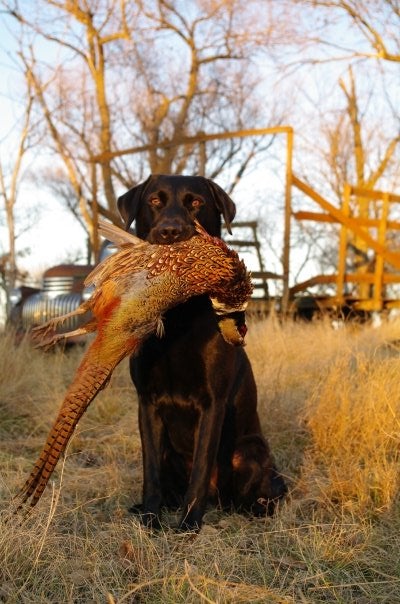 I’ve been in a cyberspace abyss for most of the last three weeks. With only flashes of internet connection, my postings on here have been minimal. What’s more, since I’m zigzagging across the country for six weeks (coincidentally, I’m posting this from 30,000 feet while flying aboard a much-delayed US Airways flight), I’ve had to leave Kona, my Lab, with a local professional trainer. It’s the first time I’ve been apart from him this long. It’s also the first time anyone besides myself has had any hand in training him.

While many hunting-dog owners buy a puppy from a breeder and have it trained for them, either for the field or the hunt-test/trial circuit, it was my goal to train my own dog. What is really anathema to me is the owner that buys said puppy, has it trained for them, and then pays a pro to campaign the animal for them. How they consider that dog “theirs” in anything more than legal paperwork, I don’t know; but to each their own–it works for them and it allows many pro trainers to continue to make bank deposits. No skin off my back. Kona, however, is wholly mine. His success in the field and any testing is due to my diligence and his genetics. His flaws, by far and large, are also wholly mine.

In future posts I’ll get to how well my six years of training Kona have panned-out according to a pro who has 40 years of experience training and campaigning Labs and working with owners. The short version is: I’m happy to report that for the most part, Kona is nearly as good as I like to imagine; it’s not just kennel blindness. There are, however, many holes I’ve left and things that I do as a trainer that Kona has taken advantage of during our years in the field. I’ll get to that later.

For now, I’ll tell you how I sleep at night knowing “my boy” is in someone else’s hands. Unlike my son, who I know is in good hands back home with his mother, when you drop your pooch off at the pro’s and drive away, many people worry about and miss their best friend and hunting companion. I do miss Kona and look forward to our November 30 hunt in South Dakota with Pheasants Forever, and hopefully, if schedules permit, a couple of days chasing roosters with Tom Dokken of Oakridge Kennels, but I know he’s doing well and is being looked after well.

First, I asked for recommendations online. After returning to the West Coast, I joined a local NAHRA club, and there asked for the names and numbers of reputable pros in the area. I didn’t want Kona to just sit around for six weeks. I didn’t need a pro to put him through an entire regiment, but rather, I wanted him to brush the rust off” so to speak, build his confidence back up on blinds, perhaps work on some marking and to get him in some sort of physical shape for our late-November hunt in South Dakota.

After receiving a recommendation of a pro named Dan Hosford, I showed up to his place unannounced. I met his wife, Janette, who told me about his schedule, rates, numbers of dogs, and then, perhaps most importantly, immediately offered to show me around the property.

I always take this as a good sign. Any kennel that won’t show you where your dog will be staying at any moment does not earn my trust. I’ve had kennels tell me it was “against their insurance policy” or “they would have to wait for their boss.” That’s crap. I want to see how clean the kennels are kept at any given moment, if dogs receive their own kennel or if they share a run once the owner leaves, and generally, just how the area that’s kept from public view looks and smells. When they offer to show you it’s a notch above just obliging.

I like the fact that he was prompt with his response. Getting to emails and such after a long day of training dogs and an early morning wake-up call the next day often keeps many pros from immediately returning calls/emails.

After that, I met with Dan and he showed me around the kennel he keeps his working dogs in (his wife runs a commercial boarding kennel in a separate building) and explained his training philosophy and began asking questions about my training philosophy–something that is varied and has been an amalgamation of processes (yes, I know this is a cardinal sin, but one I’ve thoroughly enjoyed and have done well dovetailing together). He asked the right questions, what I would or wouldn’t be interested in during Kona’s stay and exactly what I wanted to see done. We took Kona out and ran a simple mark and blind. His work, and mine, after so much time off, was marginal–at best.

With more years training dogs than I’ve been alive and having done and said the right things, I’m comfortable leaving Kona in his hands and sleep well at night knowing that he’s learning a ton and is going to be sharp on our Pheasants Forever adventure.

I’ll keep you apprised of the situation and Kona’s progress, as well as what I’m learning or have forgotten over the last several years, and how you might benefit from it. For now, keep in mind some of things I look for when boarding your pooch, be it for a weekend getaway or the equivalent of a hunting-dog boot camp.