Of Pheasant Sandwiches and Ghosts

I arrived in Aberdeen, South Dakota, without a hitch. The weather has broken and hunting prospects look to be perfect... 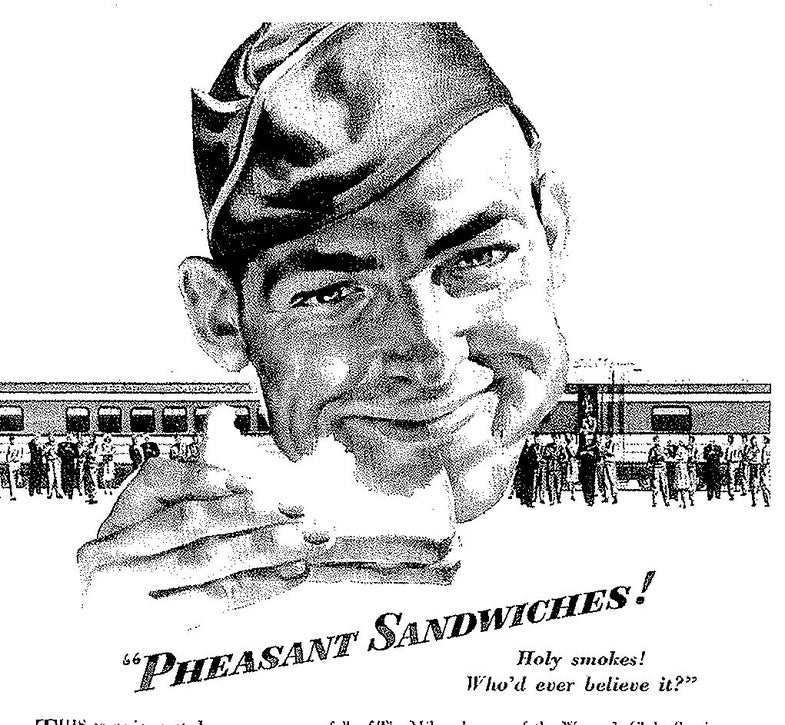 I arrived in Aberdeen, South Dakota, without a hitch. The weather has broken and hunting prospects look to be perfect for an early late-season outing with highs in the 20s, a slight coating of snow and light winds out of the West at 6 mph.

At our introductory dinner, we learned of Aberdeen’s historic and patriotic role in providing for our troops. Not only did the women of this fine town and county work diligently to support our troops against the original Axis of Evil, pheasants, too, played a role in that community service.

Oh, and Bob St. Pierre’s room is haunted…something that I have to take advantage of during the next two days.

The women that worked the American Red Cross canteen during World War II, a place that became known as the “Pheasant Canteen”, served hot meals to more than 500,000 troops traveling across the country headed for either training camps within our borders or deployment overseas to fight the Nazis or Japanese.

Concerned Aberdeen citizens opened the Red Cross/USO Canteen on August 19, 1943 in the depot of the Chicago-Milwaukee railroad. This unique service continued for more than two years, until March 22, 1946. An average of 500 troops arrived on 4 to 6 trains each day, with more than 1,500 troops visiting the small town one day.

Being South Dakota, the ham sandwiches, cake and fruit lunches were quickly supplanted by pheasant-based dishes. Donated birds, at one time more than 1,000 pheasants were in storage for the canteen (we’re told the local warden looked the other way for patriotic purposes), comprised the mainstay of the meals.

Lunches, made famous at the “Pheasant Canteen”, were comprised of pheasant sandwiches, the recipe of which is as follows:

Two keys to making it an “official” Aberdeen Pheasant Sandwich are: 1. chop that pheasant, don’t grind it! Grinding changes the consistency drastically and just wouldn’t do for our troops or your guests. 2. Don’t put it on a bun and call it good. Use bread; specifically, Pullman Loaf bread.

While luminaries such as Dwight D. Eisenhower and Harry S. Truman served at the canteen, it’s unlikely that either of them haunt room 222 at the historic Ward Hotel. That’s the room Bob St. Pierre, the Vice President of Marketing for Pheasants Forever, occupies and that supposedly houses a “friendly” male ghost that enjoys slapping the backside of the room service girl and pulling pranks on hotel staff.

The fact that Bob’s German shorthair, Trammel, a female despite the ode to the Detroit Tigers ballplayer, wouldn’t leave her crate without incentive only confirms the suspicion that he’ll be spooning with Casper over the next two days. Bob even received instructions as to which side of the bed to sleep on…they just didn’t specify if the “right” side of the bed was as you looked at the bed or as you laid in it.

This is something that must be taken advantage of over the next two days. Does anyone have a good idea as to how best to scare the bejesus out of Bob?????