As if pushing through pheasant-filled fields in the Nirvana of South Dakota wasn’t enough, the chance at a monetary reward... 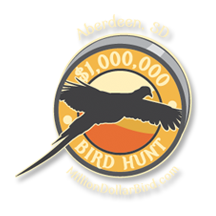 As if pushing through pheasant-filled fields in the Nirvana of South Dakota wasn’t enough, the chance at a monetary reward also awaits Aberdeen-area hunters.

One hundred banded roosters in Brown County give hunters a shot at not only filling their freezers, but also their wallets. The specially denoted birds give immediate monetary rewards of $100-$500 and one bird could be worth up to $1,000,000!

The Aberdeen Visitor’s Bureau has come up with the Million Dollar Bird promotion as another way to draw pheasant hunters to the area–as if more than 200 pheasants per-square-mile and a state-leading harvest in excess of 90,000 birds wasn’t enough reason!

Banded birds are worth between $100 and $500 for the hunter lucky enough to harvest them. All band numbers are then entered into the $1,000,000 drawing. On January 7 one band will be drawn and compared to a pre-selected number stored in a secure electronic safe. If the band matches that number, the hunter wins a million bucks. It’s that simple.

I don’t know what the actual odds of winning are (probably pretty astronomical) but it’s a great value-added bonus to hunting one of the hottest pheasant spots in world. I know that when I visit the area at the end of the month with Pheasant Forever, I’ll be checking the leg of every bird Kona brings to hand…which begs another question:

While I can dream about dropping the million-dollar bird, what if one of my hunting partners shoots it but Kona retrieves it? There must be some sort of “handler’s fee,” right?